Sandeep set to dare for Devils

The Nepal lad feels sharing the dressing room with stalwarts like Gautam Gambhir, Kagiso Rabada will be a great boost to his cricketing career. 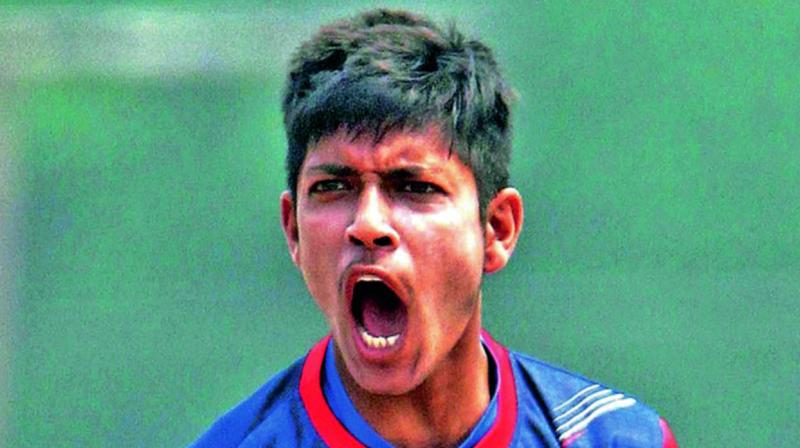 Hyderabad: Even as Jaydev Unadkat hogged the limelight by becoming the costliest Indian-buy at the Indian Premier League auction on Sunday, there was another name that created a buzz on the social media after Richard Madley’s hammer fell with the confirmation ‘sold’.

Nepal’s Sandeep Lamichhane, a not-so-known name among the mass cricketing audience, made his mark by getting an IPL ticket worth Rs 20 lakh. The 17-year-old was picked by Delhi Daredevils.

“It was a special moment for me and it feels really great to be a part of IPL, especially since I am the first from Nepal to break through,” an overjoyed Sandeep told this newspaper from Dubai where he is currently training for Division Two of the World Cricket League.

The Nepal lad feels sharing the dressing room with stalwarts like Gautam Gambhir, Kagiso Rabada will be a great boost to his cricketing career. “I am very excited to be the part of Daredevils side. Being in the company of top international players will help develop my skills further. Gautam Gambhir, Kagiso Rabada, Chris Morris they all are experienced players and I will get to learn a lot from them,” he said.

The leg-spinner, who is a big fan of Sachin Tendulkar and Australian great Shane Warne, garnered attention in the 2016 Under-19 World Cup where he became the second highest wicket-taker by claiming 14 dismissals from six innings. His best came against Ireland, where he anchored Nepal’s eight wicket victory by picking 5/27 which also included a hat-trick. “That was really big for me. It’s a feat that is very close to my heart. After taking the hat-trick I learnt that I was the first player from Nepal to achieve the feat,” he said.

Later, Sandeep was drafted into Hong Kong T20 Blitz where he caught the attention of former Australia captain Michael Clarke, who later invited him to be the part of Western Suburbs club in Sydney. In addition, he also got the opportunity to train at Clarke’s cricket academy.

As the news of Sandeep’s selection in IPL broke out, a delighted Clarke tweeted, “To the people of Nepal, you should be very proud of @IamSandeep25 he is little champion who wants to do his country proud. Cheer him on and enjoy the journey with him. God bless.”

“Playing under Michael was a great opportunity and experience for me. He shared his cricketing experience and explained a lot of things to me which helped me enhance my cricket. I got to learn a lot from him,” Sandeep said.

In his moment of joy Sandeep also remembered those who contributed to his success. “There are lot of people who played crucial roles in my life and career.

“My family, my coach Raju Khadka (first Nepalese player to score an international century) and my former and current national team coaches Pubudu Dassanayake and Binod Das. They all helped me reach this stage.”