ICC World Cup 2019, Players to watch out for: Dinesh Karthik

Many consider Karthik's innings against Bangladesh in the Nidahas Trophy Final as the best innings of his career. 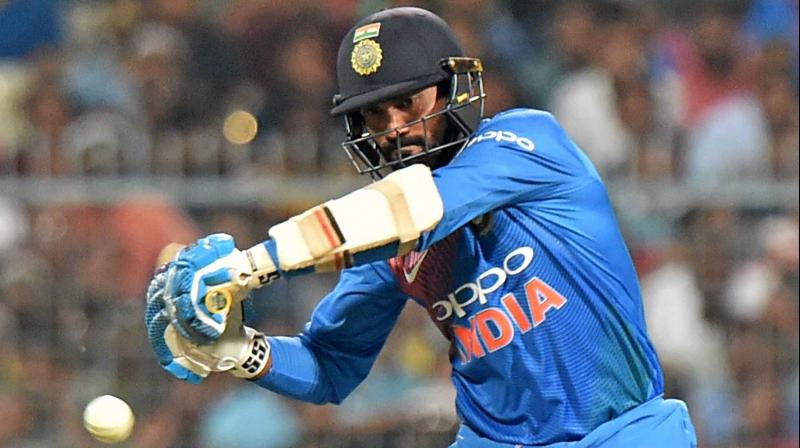 The inclusion of Dinesh Karthik in the World Cup squad had raised many eyebrows, considering the fact that youngster Rishabh Pant was also available to fill the slot of backup wicket-keeper.

The selectors justified their decision by stating that Karthik's experience was the sole reason behind his selection for the World Cup.

Apart from the experience, the ability to finish matches and alter himself in any batting position makes Karthik an ideal candidate for filling up the middle-order batting line-up.

Many consider Karthik's innings against Bangladesh in the Nidahas Trophy final as the best innings of his career. Karthik not only proved his experience in his innings but also exhibited his power hitting to finish the match for India.

Karthik smashed 22 runs in the 19th over against Rubel Hossain, at a point where India needed 34 runs to win from just two overs. He finished the match for India, hitting a six on the last ball over mid-off.

Karthik was rather surprised by his selection ahead of Rishabh Pant as the selectors had preferred Pant over Karthik in the recent series against Australia. The 33-year-old hailing from Tamil Nadu has been in the international circuit since 2004. His journey has been intermittent with the national side but has performed well in First-Class cricket, with an average of 40.76.

Many keepers had a stint with the national side since the past decade but only Karthik is evident in the present time, with likes of Parthiv Patel, Wriddhiman Saha and Robin Uthappa fading away from the international scene. Karthik’s wicket-keeping skills have evolved through the years and his agile stumping to dismiss Michael Vaughan will always be regarded as one of his best stumpings.

In the keeping department, Karthik is likely to be overshadowed by MS Dhoni in the World Cup. But Karthik is the sort of player who can adapt to any batting position, making him an ideal candidate to fill up the number four spot for India.

Karthik can make his presence felt by showcasing his batting ability in the tournament. Also, he can field at any position and has displayed his athleticism in many instances. His flying catch to dismiss Graeme Smith is a prime example of his fielding ability. Karthik considers winning the T-20 World Cup in 2007 as the most important moment of his career.

Many KKR fans were sceptical with the appointment of Karthik as the new skipper in 2018, replacing Gautam Gambhir. But Karthik silenced his critics by leading KKR to the playoffs, scoring 412 runs in 13 matches. He was the highest run-getter for KKR in that season.

However, the current IPL season for KKR has been grim with Russell being the talisman for the team. Karthik had a stint with five IPL franchises till KKR bought him in 2018 for 7.60 crores. One of the remarkable innings of his IPL career was for Gujarat Lions in 2017. Karthik played a classy inning of 65 runs in 34 balls, putting up a century stand with Suresh Raina.

Karthik along with Suresh Raina put up a century stand for the 3rd wicket. Karthik's innings was full of class and elegance

Even if Karthik loses the battle against MS Dhoni for the wicket-keeping spot in the team, he has the potential to strive for the number four spot. Karthik will have to fight for a spot in the batting line-up against Vijay Shankar, KL Rahul and Kedar Jadhav. He will certainly aim to deliver his best as this is probably going to be the last World Cup of his career.

Karthik has scored 1738 runs in his ODI career with an average of 31.04. He has the experience of playing 91 ODIs for the country, which was a prominent reason behind his selection in the 15-member squad for the World Cup 2019.