World number 1 one-day international (ODI) side lead by skipper Eoin Morgan is one of the favourites for the tournament. 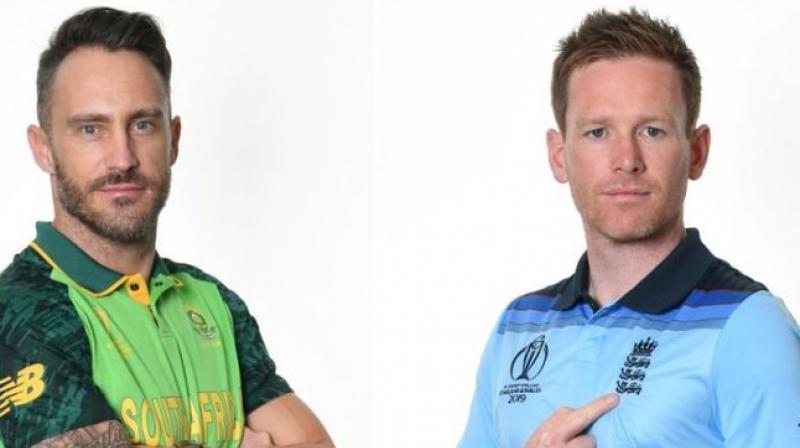 New Delhi: England is all set to host the ICC Cricket World Cup 2019 here on Thursday. In the tournament opening encounter, the hosts England will take on South Africa at the Oval in London.

World number 1 one-day international (ODI) side lead by skipper Eoin Morgan is one of the favourites for the tournament. The team is in a great rhythm and all the players are performing well. While the Proteas are currently ranked number two in ODIs.

South Africa has often been termed as 'chokers'. The team has never gone past the semi-final stages of the World Cup. This is the 12th edition of the Cricket World Cup (CWC) and both the teams are yet to lift the World Cup trophy.
Both England and South Africa are in great form, both have won their last five ODI matches.

Five players to watch out for in the first match of the World Cup:

Opening batsman Jonny Bairstow has been consistent form ahead of the tournament. The 29-year-old, who played for Sunrisers Hyderabad in the Indian Premier League (IPL), scored 445 runs in 10 games, including a 52-ball century against Royal Challengers Bangalore. He even displayed big-hitting skills against Afghanistan in the team's final warm-up match ahead of the World Cup.

England's aggressive wicket-keeper batsman is known to hit bowlers out of the ground. Butler with big hitting capabilities provides great strength to England's middle order. He will be the crucial cog in batting if the top-order fails to perform. Apart from batting, Butler is the main man behind the stumps for the English team.

Initially, he was not named in England's preliminary squad for the World Cup, but then he was called up for the World Cup. Archer, the right-arm fast bowler is set to leave his mark in CWC. The 24-year-old fast bowler played two matches in the recently concluded five-match ODI series against Pakistan. He also performed well in recently concluded Indian Premier League (IPL) season and took 11 wickets with an economy rate under seven.

South Africa's wicket-keeper batsman Quinton de Kock strengthens the top-order and provides speedy start to the innings. Ability to adapt according to the situation and power hitting is the plus point of Quinton. With an average of more than 45 in
100 plus ODI's, he has been consistent in the past.

Kagiso Rabada possesses the skills of bowling both in-swingers and out-swingers. The 24-year old right-arm fast bowler is also known for his toe-breaking yorkers in the death overs. Rabada finished as the top-two wicket-takers in the recently concluded Indian Premier League (IPL) as he represented Delhi Capitals in the tournament.

England and South Africa squads for the World Cup: