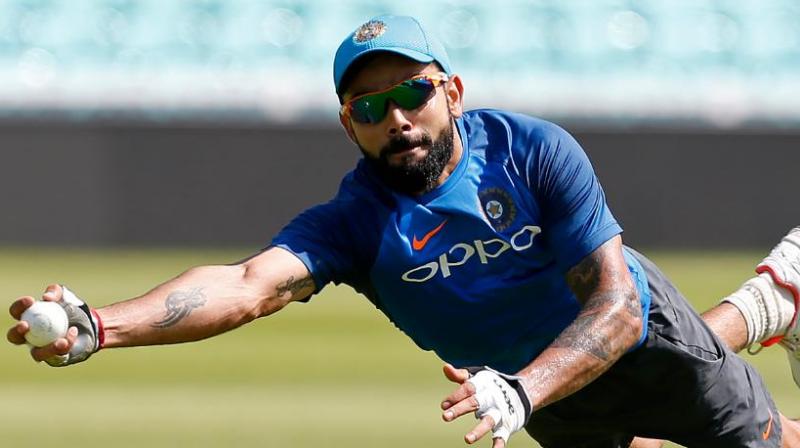 During the team's practice session, skipper Virat Kohli was earlier seen practising with the spinners but later moved on to face the pace attack in the nets.(Photo: Cricket World Cup/Twitter)

Southampton: After losing the first warm-up game, India regained its confidence as they registered a dominating victory over Bangladesh in their second warm-up match and now gearing up for the ICC Men's Cricket World Cup as the team sweated in the nets at the Rose Bowl stadium here on Thursday.

During the team's practice session, skipper Virat Kohli was earlier seen practising with the spinners but later moved on to face the pace attack in the nets. Apart from Kohli, Shikhar Dhawan and 2011 winning-captain MS Dhoni too spent time in the nets enhancing their skills.

Kedar Jadhav, who recently recovered from his shoulder injury which he picked up during the Indian Premier League, looked in good shape during the practice session.

Bowlers were seen improving their bowling attack. Bhuvneshwar Kumar experimented on his pace and swing alone in the nets. Whereas, India team head coach Ravi Shastri, who was there for the whole session, guided Kumar on how to bowl according to the wicket conditions.

However, spinner Kuldeep Yadav skipped the practice session as he was not well.

India will face South Africa for their first World Cup 2019 clash on June 5.