Pakistan had lost 4-1 in Australia before the tournament and arch-rivals India whipped them by 124 runs in the opening game of the Trophy. 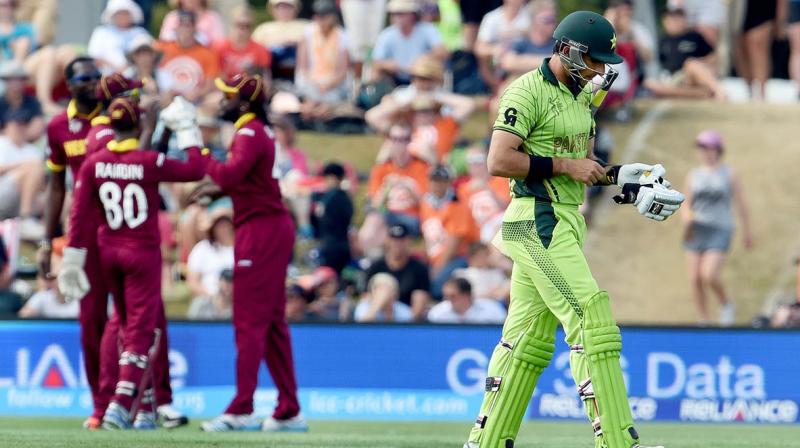 Pakistan have lost their past ten one-day internationals including a 5-0 whitewash by Australia and 4-0 thumping by England, and their problems were further compounded when they went down to outsiders Afghanistan by three wickets in a warm-up match. (Photo:AFP)

Nottingham: Pakistan will seek inspiration from their dramatic Champions Trophy win in England two years ago when they take the field in their opening World Cup match against a resurgent West Indies on Friday.

Pakistan have lost their past ten one-day internationals including a 5-0 whitewash by Australia and 4-0 thumping by England, and their problems were further compounded when they went down to outsiders Afghanistan by three wickets in a warm-up match.

But skipper Sarfaraz Ahmed hopes his side will draw inspiration from when they were in a similar position in 2017.

"We will seek inspiration from our Champions Trophy win because then also we were losing and then lifted ourselves at the right time to win the trophy," Sarfaraz told AFP ahead of the game in Nottingham.

Pakistan had lost 4-1 in Australia before the tournament and arch-rivals India whipped them by 124 runs in the opening game of the Trophy.

But Pakistan then beat South Africa, Sri Lanka and England on their way to the final, where they thumped India by 180 runs.

"The boys are motivated and are eager to put these losses behind them and by playing in England for a month we are well prepared and you will hopefully see us doing well," said Sarfaraz, one of Pakistan's only two survivors from the 2015 World Cup, with left-handed batsman Haris Sohail the other.

Sarfaraz will also hope his spearhead Mohammad Amir -- playing his first World Cup after missing the 2011 and 2015 editions due to a spot-fixing ban -- will dismantle the West Indies top order boasting hard-hitting opener Chris Gayle and the impressive Shai Hope.

"We know Amir is an impact bowler and he knows his responsibilities and I am sure he will lift his bowling and get us early wickets," said Sarfaraz of Amir, who recovered from chickenpox in time to get a World Cup call after being left out of the preliminary squad.

His form will be crucial for Pakistan -- he has taken just five wickets in 15 matches since his match-winning three wickets against India in the Champions Trophy final.

Pakistan have only won three times in 10 World Cup matches against the two-time world champions, including a thumping 150-run loss at Christchurch in 2015.

Andre Russell smashed a 13-ball 42 with four sixes and then took three wickets as Pakistan were blown away.

Russell smashed 54 off 25 balls and Hope hit a century to propel the West Indies to 421 in their warm-up win against New Zealand on Tuesday.

That prompted all-rounder Carlos Brathwaite to say his team can break the 500-barrier.

"If you are asking me if we are capable of it, definitely we are," Brathwaite said.

"However, in a real game you probably won't have the depth in batting at 10 and 11 that we had today. So you need to be a little real about the target."

West Indies are also returning to form after sneaking their way into the World Cup through a qualifying round in Zimbabwe last year.

They squared a one-day series against top-ranked side and pre-tournament favourites England 2-2 at home earlier this year before losing the final of a tri-series to Bangladesh in Ireland.