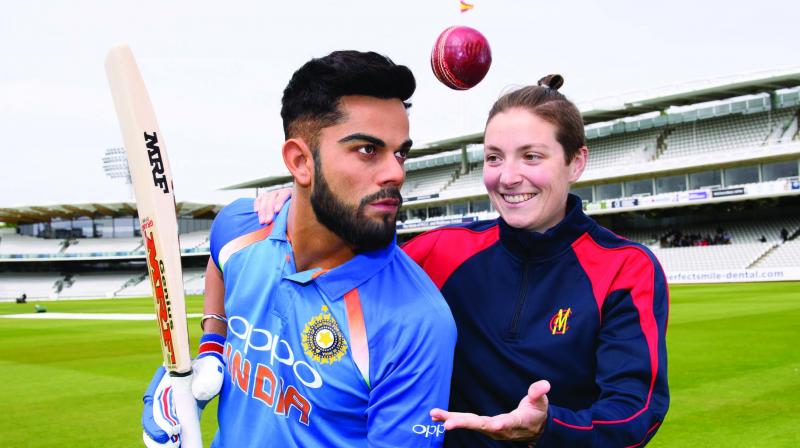 A member of the staff gets up close to Madame Tussauds London’s newly unveiled figure of Virat Kohli at Lords Cricket Ground. The figure will be available for guests to see at the world-famous attraction from Thursday.

London: His batting conquests are already a stuff of legends and a World Cup victory will be like the ‘Kohinoor’ in ‘King’ Virat Kohli’s crown. His tunnel vision quest for the crowning glory will be littered with many hurdles — which may come in the garb of Steve Smith and David Warner, the Australians who have been longing for a career resurrection for more than 12 months now. And then there is Irishman Eoin Morgan leading the England team, as he seeks to end a ‘44-year-old English itch’ — no WC victory since 1975 — backed by a team packed with talent and ambition like never before.

Kohli’s reputation as one of cricket’s great entertainers is well-established, but the India star will not be completely satisfied until he leaves an indelible mark by winning the World Cup as captain. Kohli has been instrumental in building on Indian cricket’s rich legacy after taking over the captaincy from Mahendra Singh Dhoni.

After helping India reclaim the number-one Test ranking, the 30-year-old led his team to a first-ever Test series triumph in Australia in January.

But it is the possibility of winning the World Cup as skipper that most inspires the flamboyant batsman, who has amassed 10,843 runs in 227 one-day international matches, including 41 centuries and 49 fifties.

Kohli still fondly remembers being part of the 2011 World Cup-winning team under Dhoni, who lifted the title on Indian soil, and would love to emulate his predecessor by leading his country to their third world title.

Kohli defied critics who had questioned his poor showing on the team’s 2014 tour of England by hitting 593 runs, including two hundreds, in the five-Test series last year. But India still crumbled to a 4-1 defeat, showing he cannot will the side to victory on his own.

Kohli’s captaincy has often been criticised, with former India opener Gautam Gambhir saying the batsman has “loads to learn” as a leader.

When captaining India, Kohli has never shied away from relying on the experience of Dhoni, who is often seen calling the shots from behind the stumps. “It seems like he is happy to see Dhoni handle some aspects of his captaincy, especially in the last 10 overs when he can focus on his fielding and take important positions in the field,” former India batsman Sanjay Manjrekar said, adding,

“But he is not completely dependent on Dhoni, that would be wrong to suggest.”

Kohli, who became the fastest batsman to reach 10,000 ODI runs last year, is already tipped to overtake one of the many records held by Indian batting icon Sachin Tendulkar. He has hit 66 centuries across all international formats since his ODI debut in 2008, with Tendulkar holding the record for 100 hundreds in his 24-year-old career. Kohli’s aggressive on-field demeanour though has ruffled a few feathers.

His verbal duel with Australia skipper Tim Paine during the Perth Test in December was criticised by Manjrekar, who said the star should behave “responsibly”. Regardless of his outspoken nature, Kohli’s consistency, attacking style and supreme fitness levels make him the standout player in this edition of the 50-over World Cup.

On batting belters, it will be the potent bowling attacks that will hold the key and Jasprit Bumrah along with two talented wrist spinners Kuldeep Yadav and Yuzvendra Chahal are expected to play pivotal roles in India’s campaign. The batting line-up is one of the most formidable with Kohli leading from the front, Rohit Sharma providing the zing and Hardik Pandya the flamboyance.

The Indian team would strive to make it a memorable World Cup swansong for Mahendra Singh Dhoni, who will be playing his fourth and final mega event. The middle-order does have some issues but India are firmly in contention and a semi-final slot is there for the taking.

For Australia, the perfect reintegration of David Warner and Steve Smith in the set-up was just what the team needed.

Warner got into the groove straightaway in the IPL ending with nearly 700 runs (692) while Smith found his bearings in the warm-up games here. 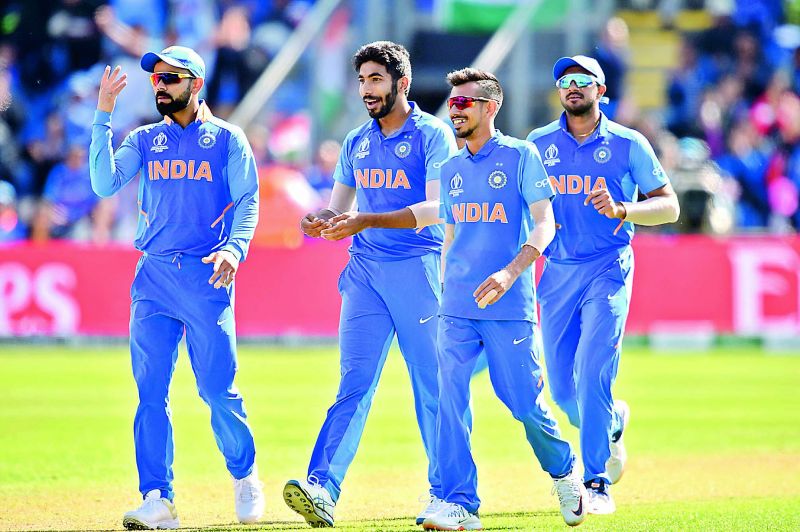 The wax statue of one of the world’s leading batsmen will be on display at Madame Tussauds from Thursday until July 15 remaining at the museum for the duration of the tournament.

Steve Davies, General Manager at Madame Tussauds London, said: “Cricket fever is set to sweep the nation in the coming weeks so what better way to unveil our new figure of Virat Kohli than with the help of our neighbours at Lord’s. We hope that cricket fans will enjoy not only watching their hero on the pitch but taking to the crease with him here at Madame Tussauds London.”

Pictured for the first time at the iconic Lord’s, the statue is dressed in the official Indian kit as well as shoes and gloves donated by the sportsman himself. From Thursday onwards, Kohli will sit alongside legends such as Usain Bolt, Sir Mo Farah and fellow Indian cricket star Sachin Tendulkar.

Tarah Cunynghame, Head of Retail & Tours at Lord’s Cricket Ground, said: “Lord’s is the perfect backdrop to reveal this fantastic figure of Virat Kohli on the eve of the Cricket World Cup. The anticipation of the exciting summer of cricket has already started, with thousands of visitors coming to the Ground and enjoying a tour of Lord’s and around the MCC Museum. The figure of the famous batsman will delight cricket fans visiting Madame Tussauds London.”

Meanwhile in New Delhi, the 1983 World Cup winning captain Kapil Dev feels Kohli’s style of captaincy four years ago was more “instinctive” but has now become more inclusive as he has mellowed down with the passage of time.

Kapil said that there is no better person to lead India in a “daunting mission” like the World Cup in England. “I must say, he (Kohli) has matured amazingly from the time he has taken over captaincy from Dhoni. I know he has been criticised for being aggressive, sometimes brash but that’s how he has played the game,” Kapil said in a newly released book World Cup Warriors written by journalist Vijay Lokapally.

“He may have looked childish to some but there was never doubt that he was challenging himself to take the game to the next level,” he said.