Boult became the first Kiwi to grab a hat-trick in the World Cup. 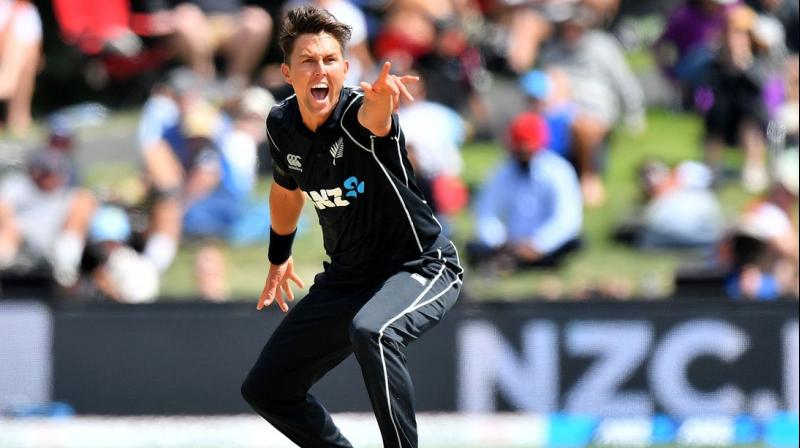 Boult was effusive in his praise for pace counterpart Starc, the tournament's best bowler so far. (Photo: AFP)

London: "Peaking nicely" and history firmly behind them, five-time champions Australia are the team to beat in the World Cup, says New Zealand pacer Trent Boult.

In a repeat of 2015 final between the trans-Tasman rivals, pace spearhead Boult's historic hat-trick went in vain as Mitchell Starc's (5/26) brilliant five-for guided the defending champions to a convincing 86-run win at the Lord's here on Saturday.

With his swinging full-pitched deliveries, Boult sent back the well-settled Usman Khawaja (88 off 129 balls), Starc and Jason Behrendorff, while giving away just two runs in the last over to become the first Kiwi to grab a hat-trick in the World Cup.

But his efforts proved futile as New Zealand were shot out for 157.

By virtue of the win, Australia, who are already through to the semifinals, have consolidated their position at the top with 14 points from eight games.

"Australia turn up for World Cups. They have a good record in them and they're peaking nicely. They produced the complete performance and they were too good for us," said Boult, who returned with figures of 4 for 51.

"There are some quality sides here but it's all about timing in my opinion and Australia are performing well, there's only a couple of weeks left and they're the ones to beat."

Boult was effusive in his praise for pace counterpart Starc, the tournament's best bowler so far.

Boult was joint leading wicket-taker in the 2015 tournament with 22 wickets, alongside Starc. But this time Starc overshadowed him and is leading the wicket-takers list with 24 scalps ahead of second-placed Lockie Ferguson of New Zealand, with 17.

"He's (Starc) six foot seven, bowls 157kph and swings it both ways! He's a classy bowler. He was used very nicely with short spells to be aggressive. He's had a stellar campaign so far," the Kiwi left-arm pacer said.

Boult, however, said it was special to grab a hat-trick at the 'Home of Cricket', his second in ODI cricket.

"It would have been nice if it was in the first over but any bowler dreams of getting three wickets in a row. To do it at the 'Home of Cricket' in front of a good crowd against Australia was pretty cool," he said.

"It's a pretty simple game plan. I wanted to disturb the woodwork and it was nice to see the stumps light up. It was a bit of entertainment for the crowd."

He said New Zealand let Australia off the hook on Saturday.

"To have them 90 for five and let them get over 200 was frustrating. If we had kept them under 200, then it's a whole different ball game," he said.

New Zealand have now suffered two successive defeats, against Pakistan and Australia, and face England in their final group match on Wednesday, a match that could yet decide who makes the final four.

"We need to win the last one. It will be a big one for England and they will be hungry  it's certainly not panic stations. The bowling plans work well against any side so there won't be much reinvention," Boult signed off.