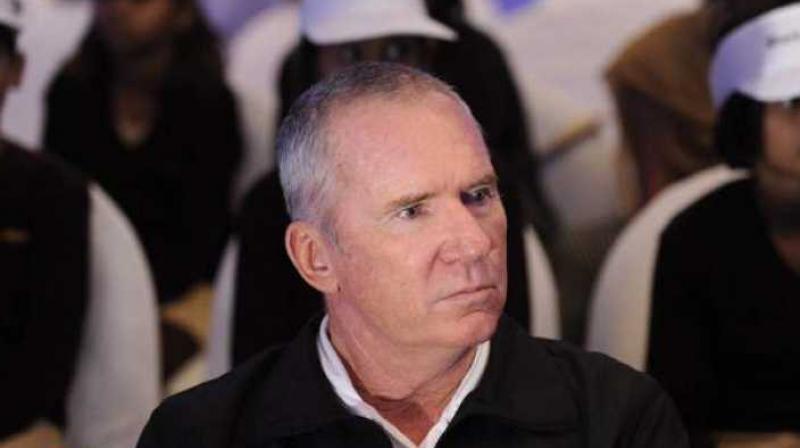 Border labelled pace bowler Mitchell Starc as the key to Australia's title bid after he took 5-26 to retain his place as this World Cup's leading wicket-taker with 24. (Photo: AFP)

London: Allan Border says Australia have the look of potential World Cup winners once again as the holders head towards the semi-finals in fine form.

Their only defeat so far came against fellow title contenders India in the early stages of the tournament.

Aaron Finch's side are already assured of a semi-final place and former Australia captain Border believes his country are rounding into peak form at just the right time.

"After a gentle start, Australia now look the real deal and the win against New Zealand has brought back that old familiar feeling that often leads to a World Cup trophy," Border said in an ICC Media column.

"This was a very impressive win because they did it the hard way.

"In this tournament, they have relied on Aaron Finch, David Warner and Steve Smith at the top of the order to get runs but all of a sudden, they had to dig deep, and to come through that is a very good sign.

"I am really confident with where this team is at. India and England demand massive respect too and you can never count your chickens - but that old familiar feeling is definitely back."

Border labelled pace bowler Mitchell Starc as the key to Australia's title bid after he took 5-26 to retain his place as this World Cup's leading wicket-taker with 24.

"He had a break from the game with back injuries and different ailments before the tournament but he has got a fantastic rhythm going here and is clocking some serious pace, comfortably over 90mph, which is why he is miles ahead of the rest in the leading wicket taker column," said Border, who led Australia to World Cup victory in 1987.

"You would have to pick him in your all-time Australia ODI side because of what he does in the big games.

"There are lots of other options out there but in the big games, he stands up.

"He has come to the boil at the perfect time and Australia now look a strong contender to win it, which is unbelievable when you look at how they  were struggling six months ago."