Pakistan edged home by three wickets with two balls to spare at Headingley but the contest turned in the 46th over, bowled by Naib. 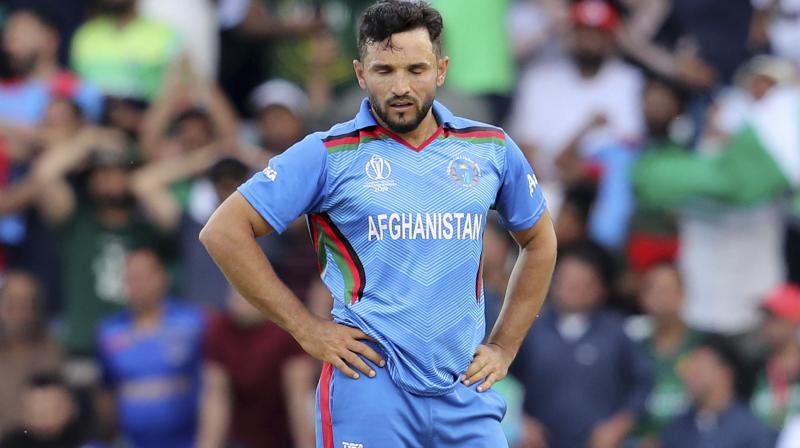 "We had the feeling they weren't targeting every bowler," said Naib (Photo: AP)

Leeds: Afghanistan skipper Gulbadin Naib defended his disastrous decision to bring himself on to bowl towards the end of a gripping match against Pakistan on Saturday -- a move that cost 18 runs in a single over.

Pakistan edged home by three wickets with two balls to spare at Headingley but the contest turned in the 46th over, bowled by Naib.

Spinners Mohammad Nabi (2-23), Mujeeb Ur Rahman (2-34) and Rashid Khan (1-50) had restricted Pakistan, who desperately needed to win to keep up their push for a semi-final place.

Pakistan, with four wickets in hand, needed 46 runs from 30 balls to win the match at the end of the 45th over but the complexion of the game was completely changed after man-of-the-match Imad Wasim smashed three fours and scrambled some more runs.

Naib also bowled a wide. Suddenly Pakistan needed just 28 runs from 24 balls and held their nerve to edge home. Seamer Naib, who conceded 73 runs in 9.4 wicketless overs, said a hamstring injury to paceman Hamid Hassan after he had bowled just two overs was the turning point in the match.

"We had the feeling they weren't targeting every bowler," said Naib, who was controversially appointed captain in place of the successful Asghar Afghan two months before the World Cup.

"Every team has their plans and I thought the crucial point is for the 46th over that I bowled and 18 runs, it's not really good."

"If Hamid was there maybe I didn't bowl more than three or four overs because I do not have enough speed for this kind of surface," he added.

But Naib gave credit to Pakistan. "I think the pressure was on the Pakistan side. But credit goes to them, how they played and how they finished the game," he said.

Afghanistan, who have lost all eight of their World Cup matches, play West Indies in their final match at Headingley on July 4.