The 65-year-old Holding is in Karachi and witnessing the ODI between Pakistan and visiting Sri Lankan team. 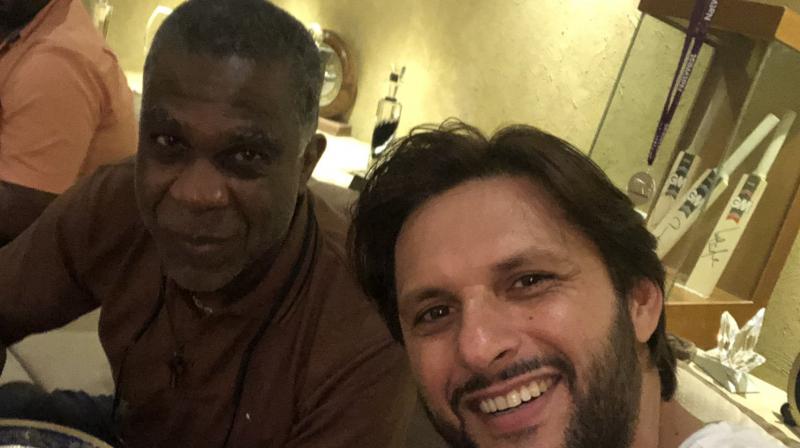 The 65-year-old Holding is in Karachi (though he is not on any commentary assignment) and witnessing the ODI between Pakistan and visiting Sri Lankan team.

His visit at Afridi's home was made possible by their common friend Dr. Kashif Ansari, who is a cancer surgeon in USA.

A real honour to host the legendary Michael Holding for a dinner at home. Thank you Dr Kashif for arranging Michael's visit to Karachi. Also thank you to Saeed Anwar for joining us. Great to have some legends visit me. pic.twitter.com/Rg2JQnDxXx

"Well, Afridi is not only a great ambassador of the game but also peace, love and humanity. I have been knowing him since last so many years. His father was my patient. He is carrying his father's legacy", Dr. Kashif Ansari, speaking exclusively over telephone from Karachi, said.

"When he came to know that I am coming to Pakistan with Michael Holding, my other good family friend and Barry Wilkinson (commentator from Barbados), Afridi did not resist the temptation of inviting us at his place".

Afridi cooked and served dishes for the guests.

During the party, Holding could not hide his disappointment towards the T-20s are played in the world.

"Holding is not a fan of T-20s but he loves Test cricket and said the game is no more a gentleman's game but has turned into the money making machine. He also spoke about how the cricket was being played some 20-30 years ago and now".

Former opener Saeed Anwar was also present at the party.