Sports   Cricket  30 Sep 2020  Shane Warne confident that Sanju will make Team India if he keeps playing like he does this IPL
Sports, Cricket

The clamour to have the enormously gifted Kerala batsman play regularly for the national team has grown over the years. 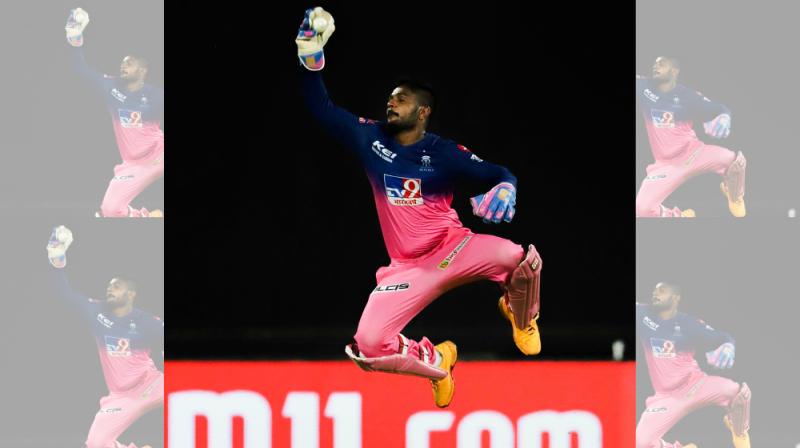 “He’s (Samson) such a talented player. I have seen a lot of talented cricketers in my time but watching Samson bat in the nets, being around him, speaking to him over the years and now watching him evolve, I mean he is something else. “He is a very special talent and I hope he hits the international stage very soon,” Shane Warne said. (Photo | Modified PTI image)

New Delhi: Sanju Samson is peerless when it comes to talent quotient and Shane Warne hopes the flamboyant Rajasthan Royals batsman has a consistent 2020 IPL and establishes himself across formats in the Indian team.

The clamour to have the enormously gifted Kerala batsman play regularly for the national team has grown over the years and knocks of 74 (32 balls) and 85 (42 balls) have only amplified the noise.

Warne, the IPL-winning former Royals captain and now a team mentor and brand ambassador believes the day is not far away.

The legendary Australian has been bowled over by Samson’s maturity and his evolution as a batsman, taking way more responsibility in this edition.

“He’s (Samson) such a talented player. I have seen a lot of talented cricketers in my time but watching Samson bat in the nets, being around him, speaking to him over the years and now watching him evolve, I mean he is something else.

“He is a very special talent and I hope he hits the international stage very soon,” said Warne, who is currently in the UAE.

Warne is also impressed seeing Steve Smith open the innings in T20 cricket for the first time. He has started well with two half-centuries in as many games.

“I liked it, him (Smith) coming to open the innings,” Warne said about Smith’s 69 and 50 in the first two games.

“I am always a big believer in your best player having the opportunity to face the most amount of deliveries, so for me you know Jos Buttler, Steve Smith and Sanju are one, two and three, respectively. That’s how I would be doing,” said the king of leg-spin bowling.

In fact, Warne feels that Smith and chief coach Andrew McDonald shouldn’t tinker with the top three, come what may.

“Steve Smith and Andrew McDonald might have different ideas but I would always want my best players facing the max number of balls. We’ve got so many good players who could play so many different roles, but I personally like Steve Smith at the top,” Warne added.

Add Ben Stokes to it and Warne feels Royals would be a formidable opposition on any surface. Stokes is set to miss the first part of IPL due to his father’s illness but a possibility remains that he would be able available during the later stages.

“Hopefully, Ben Stokes would play a part this year, he’s a big loss and our thoughts are with him, but you know, add Ben to the team that played the other night and it looks a very very good side,” Warne added.

For someone who understands the tough job that leg-spinners have in this high-scoring format, Warne is impressed with the way Shreyas Gopal and Rahul Tewatia bowled, keeping the evening dew in mind.

“I mean it wasn’t easy with the dew, on the ball in a small ground in Sharjah. I thought he (Shreyas) bowled into the pitch nicely, I really liked what I saw and I am looking forward to working with him and Gopal again.

“We are very lucky to have quality spinners in our team. They are all different but all very effective. So, I thought Gopal was outstanding.”

Not one to paper over the problem areas, Warne wants Jaydev Unadkat to understand his role in the team.

“JD, look he hasn’t quite nailed it. He is still trying to work out his role in the team. When I speak to him, my advice would be don’t be afraid, back your instinct even if it means that you can go for a boundary.”

Each bowler has certain deliveries which are his strengths but Unadkat needs to learn in which situation he needs to bowl those ones.

“It’s okay, back yourself in, bowl your best ball, make them play good shots to good balls and just choose the right option. I think Unadkat is just choosing the wrong time to bowl his best balls.

“I think he could just work it out a little bit better but I know he will come good. We need him bowling well and hopefully he will be able to deliver soon.”

Warne also named the three players he would be watching with a lot of interest.

“I know Gopal’s not super young but he is young in experience at the top level so I think he’s going to go on to be the spinner of the tournament this year. He was fantastic last year and I think he’ll be great this year.

“And the young boy, eighteen-year old left-hand opener, (Yashasvi) Jaiswal and what a story it is. They’re the three standouts I think.”

In conclusion, Warne spoke about his picks for the play-off spots.

“Four teams, Rajasthan Royals. I think it’s hard to go past Chennai Super Kings, they will always be there or thereabouts.

“I think Mumbai Indians will be there too, they have got a very well-balanced squad and the fourth spot, I will probably have to lean towards Delhi Capitals. DC has got a lot of firepower so I think they’ll be the fourth team,” he signed off.