Shakib was initially named as the captain for the three-match T20I series but he was on Tuesday handed a two-year suspension by ICC. 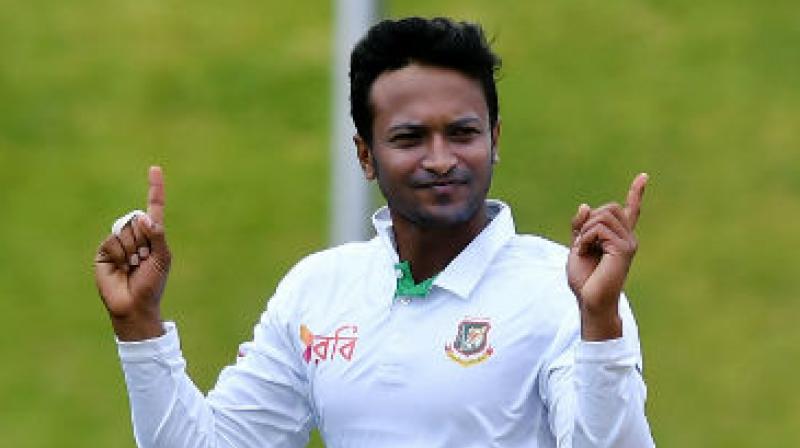 The one-year ban that he has to serve will keep him out of next year's Indian Premier League (IPL) and also the World T20 to be held in Australia. (Photo: AFP)

Dhaka: Mahmudullah Riyad and Mominul Haque were on Tuesday handed the reins of Bangladesh's T20 and Test squads respectively after the ICC slapped a two-year ban on regular skipper Shakib Al Hasan for failing to report three corrupt approaches.

Bangladesh Cricket Board (BCB) named Mahmudullah as the T20 captain, while Mominul will lead the Test side during their much-anticipated tour of India which comprises three T20 Internationals and two Tests beginning with the shortest format games on November 3 in New Delhi.

Shakib, Bangladesh's Test and T20 captain and the world's No.1 all-rounder in ODIs, was initially named as the captain for the three-match T20I series but he was on Tuesday handed a two-year suspension by the ICC for failing to report three corrupt approaches, including one at the IPL, by a suspected Indian bookie, ousting him from the upcoming tour of India.

Twelve months of that ban is a suspended sentence which will come into effect if the 32-year-old fails to comply with the anti-corruption code of the world body.

The one-year ban that he has to serve will keep him out of next year's Indian Premier League (IPL) and also the World T20 to be held in Australia from October 18 to November 15 the same year.

Left-arm spinner Taijul Islam,  who made his T20I debut earlier this year against Zimbabwe, was included in the T20 squad in place of Shakib, while Mohammad Mithun and Imrul Kayes also found a place in the squad after Bangladesh had to make changes due to the absence of Tamim Iqbal and Mohammad Saifuddin.

Mithun replaced Tamim, who decided to stay with his wife with the couple expecting their second child, while Abu Hider Rony came in place of Saifuddin, who was ruled out of the series because of a recurring back injury.

Returning to the Test squad after their tour of New Zealand in March was Bangladesh left-arm pacer Mustafizur Rahman, who will be also available for the T20Is.

India and Bangladesh will play their maiden Day-Night Test during the tour in Kolkata from November 22 to 26, the second game of the two-Test series.