Shakib Al Hasan was, on Tuesday, handed a two-year suspension by the ICC for failing to report three corrupt approaches. 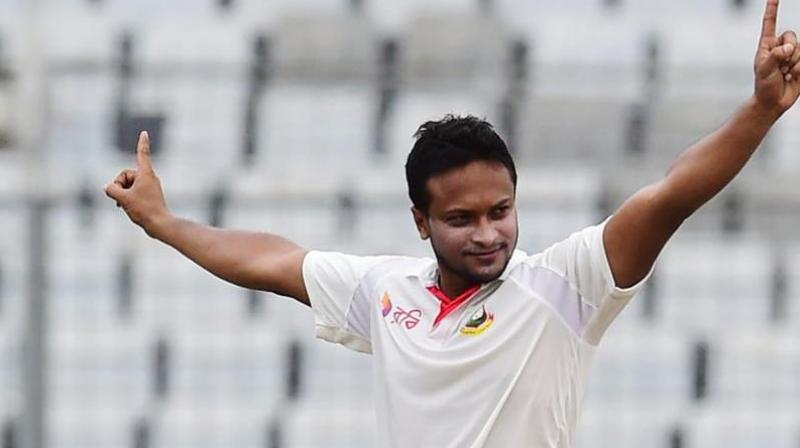 Twelve months of that ban is a suspended sentence which will come into effect if the 32-year-old, Shakib Al Hasan, fails to comply with the anti-corruption code of the world body. (Photo: AFP)

Dhaka: ODI captain Mashrafe Mortaza on Wednesday said he will spend many sleepless nights after the recent ICC ban on his colleague Shakib Al Hasan but exuded confidence that the star all-rounder will make a successful comeback and lead Bangladesh to the 2023 World Cup.

Shakib, Bangladesh's Test and T20 captain and the world's No.1 all-rounder in ODIs, was on Tuesday handed a two-year suspension by the ICC for failing to report three corrupt approaches, including one at the IPL, by a suspected Indian bookie, ousting him from the upcoming tour of India.

Twelve months of that ban is a suspended sentence which will come into effect if the 32-year-old fails to comply with the anti-corruption code of the world body.

The one-year ban that he has to serve will keep him out of next year's Indian Premier League (IPL) and also the World T20 to be held in Australia from October 18 to November 15 the same year.

"Definitely I will spend some sleepless nights in the light of the recent incidents surrounding my comrade of 13 years. But I can also sleep in peace soon knowing fully well that he will lead us to the 2023 World Cup because the name is Shakib Al Hasan," Mashrafe wrote in Bengali on his twitter handle.

Former skipper Mushfiqur Rahim also offered support to Shakib, saying he can't even think of taking the field without him and him along with the whole country stands firmly behind him.

"Don't know what should I say. Still I can't able to believe that we have to play without you. But I know and believe one thing that you will be definitely come back strongly. We will be waiting for the day @Sah75official Bhai. #WeAreWithShakib," he tweeted.

Mushfiqur also expressed his views on his Instagram handle.

"Age level.. international? over 18 years of playing cricket together, very sad to even think about playing without you on the field. Hoping that you come back soon like a champ. You always have my support and the whole of Bangladesh. Stay strong," he wrote.

Shakib was spoken to by the ICC's Anti-Corruption Unit in January and August this year and he failed to report the approaches made to him by "an individual known to the ACU and suspected of involvement in corruption in cricket, Deepak Aggarwal."

The ICC said Aggarwal had asked Shakib to provide information on team composition and strategy on three separate occasions, one of them being April 26, 2018, when his IPL franchise Sunrisers Hyderabad was to take on Kings XI Punjab. Sunrisers won the game by 13 runs.

Shakib had "accepted three charges of breaching the ICC Anti-Corruption Code", something which went in his favour as he escaped the maximum punishment of five years for the offence.