The wicket at the Kotla set aside for the Test is the one on which India beat New Zealand by 53 runs in a T20 on November 1. 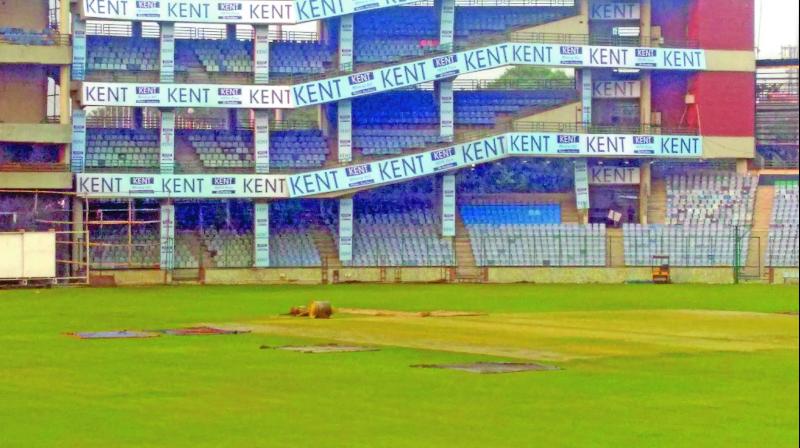 The Ferozeshah Kotla wicket sports a greenish tinge on Wednesday. The third Test begins on Saturday.

New Delhi: Ferozeshah Kotla ground staff are yet to receive any instructions from the team management and are preparing a “typical Test wicket” for the third and final match against Sri Lanka, beginning on Saturday.

India’s insistence on a headstart for their three-Test series in South Africa, beginning on January 5 has seen them prepare “green” wickets in Kolkata and Nagpur in the first two Tests.

India lead the series 1-0 but struggled to negotiate the prodigious swing and seam movement in Kolkata on the first day, bundled out for on1y 172 in the first innings.

The home team’s batting performance, however, improved dramatically in the second innings at Eden Gardens under favourable batting conditions, the momentum carrying on to Nagpur where they plundered the Sri Lankan attack.

The wicket at the Kotla set aside for the Test is the one on which India beat New Zealand by 53 runs in a T20 on November 1.

The hosts posted 202/3 after taking first strike and then restricted the Kiwis to 149/8.

“That was a T20 wicket. This one will be a typical Test pitch, being prepared to last the distance. Due to wintry conditions, one can expect a bit of seam movement early on, particularly in the first two days,” a BCCI employee who oversees pitch preparations said on Wednesday, requesting anonymity as he is barred from speaking to the media.

“It will ease out as the match progresses, with wear and tear taking its toll. Batting will then be relatively easier and the spinners will also get turn,” he said, adding that no specific instruction had arrived from the team think-tank as yet.

In another development, the Delhi and District Cricket Association on Wednesday honoured former Indian women’s cricket team captain Anjum Chopra by renaming Kotla’s gate no. 3 and 4 after the cricketer-turned-commentator, who played in six World Cups and was the first Indian to play 100 ODIs in women’s cricket.