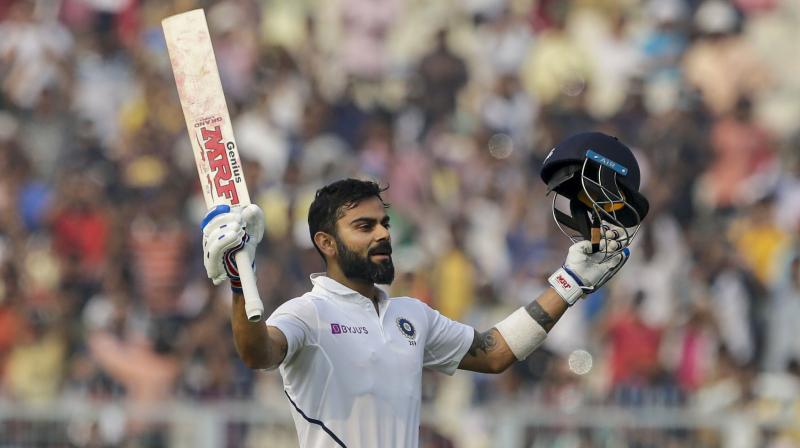 Indian captain Virat Kohli will end the year at the top of the ICC Test ranking chart for batsmen but five-day specialist Cheteshwar Pujara slipped a place to fifth. (Photo: AP)

Dubai: Indian captain Virat Kohli will end the year at the top of the ICC Test ranking chart for batsmen but five-day specialist Cheteshwar Pujara slipped a place to fifth.

With 928 points, Kohli is way ahead of second-placed Australian maestro Steve Smith (911) and New Zealand's inspirational skipper Kane Williamson (822), while Australia's Marnus Labuschagne, who has amassed 1,085 runs in 11 Tests this year, improved a place to grab the fourth spot.

Pujara was placed fifth with 791 points, while Ajinkya Rahane was joint seventh with 759 points.

With his enterprising 95 against England in the first Test, Quinton de Kock not only set up his team's win but also shot into the top of the latest rankings released on Monday.

In bowling, India's lead pacer Jasprit Bumrah, returning from an injury layoff, remained static at sixth position with 794 points, while spinner Ravichandran Ashwin (772 points) and seamer Mohammed Shami (771) were ninth and tenth respectively in the order.

Australian pace spearhead Pat Cummins was at the top of the standings with 902 points ahead of Neil Wagner (859) and South African paceman Kagiso Rabada (832).