On the road I’m just another blind man, not a cricketer, says Patrick Rajkumar

I learnt the game very fast but my job required me to go beyond teaching them the rules and techniques, says Patrick Rajkumar. 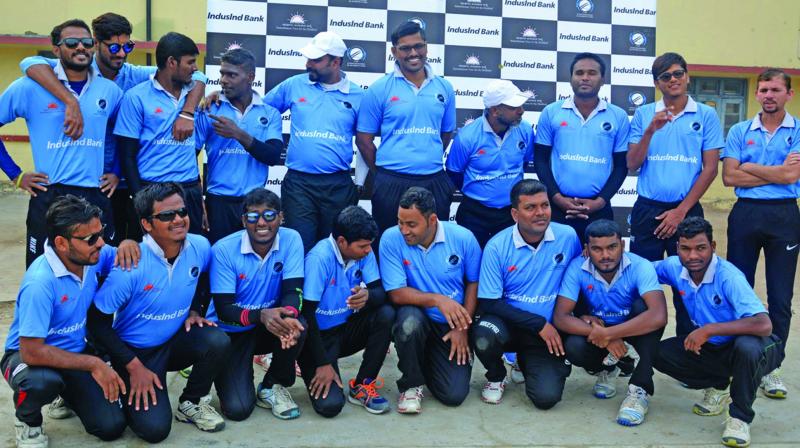 The Indian blind cricket team defending its title at the second edition of the T20 World Cup Cricket for the Blind.

Passionate about a sport that gets them little fame and money, the Indian blind cricket team is defending its title as world champions, and confident of lifting the T20 World Cup Cricket for the Blind trophy again.

In a nation that is blinded by its love for cricket, there is a team that plays the gentleman’s game and yet feels the nation has turned a blind eye towards it. This team is the current world champion, and presently defending its title at the ongoing T20 World Cup Cricket for the Blind where ten teams are participating. And they are confident of winning the title. On spending time with the players, one realises that it is their sheer conviction and love for the game that keeps them hooked to a sport that gets them little fame and money.

Conquering the mind before heading to the field
To train players who are partially and completely visually impaired must be a tough task but the coach of the team, Patrick Rajkumar, tells us that he had a bigger battle to win, not on the field but outside it. “I learnt the game very fast but my job required me to go beyond teaching them the rules and techniques. I had to boost their self-confidence. Some of the players come from a rural background and have lived a very tough life. They get angry and upset very fast and don’t easily trust you. I worked on their overall personalities. For the five years I’ve been coaching this team, I have learnt that they all share a common trait — they don’t want to be considered disabled. These cricket-crazy fellows also have great mental strength.”

We will win the Cup again!
Ajay Kumar Reddy, the captain, lost his vision after he met with an accident as a child and his dreams of joining the army came crashing. However, while narrating anecdotes from his career spanning seven years, he smiles while mentioning that he won the man of the match award in his debut game. “As a player I was as aggressive as Kohli, but after learning about what a cool captain Dhoni is, I followed his example. Because we are so passionate about the game, the matches are played with high intensity and I often have to calm down the boys,” Reddy says and promises that his team will once again lift the trophy.

The vice-captain, Prakasha Jayaramaiah, who is also a wicket-keeper, has to do a lot of communication on the field. He was inspired by Sachin Tendulkar and Sourav Ganguly and cursed his disability for not being able to play the game — but only until he was introduced to the blind’s cricket. “Today, I have played 47 international matches and scored around 29 centuries,” he says, taking great pride in the fact that he has scored more tons than his favourite player, Virender Sehwag. He adds, “I have scored the fastest century as well and let me tell you a secret — the Pakistani team especially fears my presence at the crease.”

Money matters, but not more than the game
The passion and support from loved ones apart, the championships and records hardly bring any change in the lives of the players. They all want BCCI, that organises the glitzy IPL, or renowned players, who buy premier league teams, to also help them out.

“When we win, the central government and state governments give us cash prizes, but otherwise we get no match fees and salary. I go back to farming in Odisha after tournaments. My mother is also blind and she asks me to not pursue the game. It’s very sad that I don’t earn a decent income but the game makes me feel alive,” says Sukhram Majhi.

Md. Jafar Iqbal, who is also from Odisha, wants to beat the Pakistan team again. He says, “You know the excitement when these two nations play against each other. Imagine how it is when one is part of the team.” But who is watching their games and talking about it? “Our country has the population, the money and the richest cricket board in the world and yet TV channels won’t telecast our matches. Our matches never reach the masses,” he says, and adds, “For a month, we have been practicing almost 12 hours a day and you know, my company cuts my salary for the days I am out playing. The man of the match awards usually range from mere Rs. 5,000 to 10,000 and that too one person gets it.”

Their teammate Sonu Golkar rues, “I may be a cricketer but on the road, I will be just another blind man. The society has this attitude towards us. We don’t get grounds and we struggle to eke out a living. Even a Ranji player gets paid in lakhs, but my application for a state award was rejected despite that fact that I am an international player. There is a conspicuous discrimination against the differently-abled. But now social media is helping us in spreading awareness.”

Still the future is not dark
But compared to the past, things seem to be changing for the better. Shekar Naik, the former captain and present mentor of the team, recently became the first blind cricketer to get a Padma Shri. “An affiliation from the BCCI will help. But see, players are coming from different states now and thanks to my Padma Shri, people are getting to know about our game. This is as good as cricket, just that we bowl underarm.” Mahantesh GK, President, Cricket Association for the Blind in India (CABI), adds, “The matches will be held in different cities of India during the World Cup while the inaugural WT20 was held only in Bengaluru. We want to create a hype about this game. The cash prizes from the Central and state governments also give them inspiration.”

The tournament concludes in Bengaluru on February12, and hopefully, this time around a larger number of cricket lovers will turn up to see the matches played by cricketers who have won India two World Cups and one Asia Cup.