During the fourth Test against Australia in Dharamsala, Cheteshwar Pujara created a new record by scoring the most runs in a Test season. 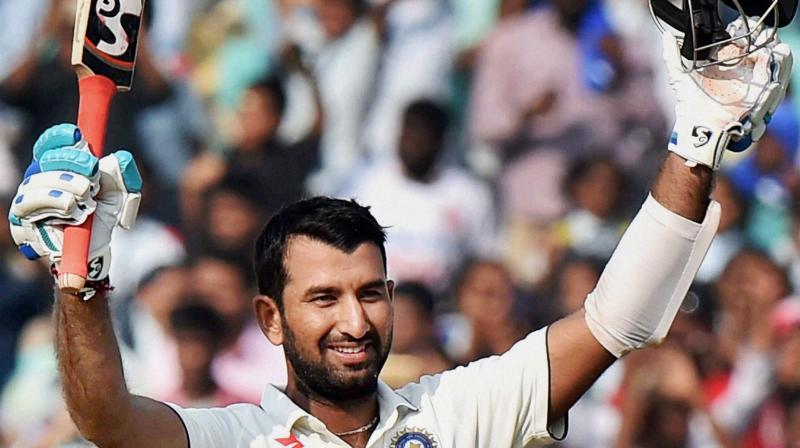 Sachin Tendulkar prasied Cheteshwar Pujara for the quiet manner in which he goes about his business of grafting long innings in a team full of strokemakers. (Photo: PTI)

Mumbai: Batting great Sachin Tendulkar has called Cheteshwar Pujara a "silent warrior" for the quiet manner in which he goes about his business of grafting long innings in a team full of strokemakers.

During the fourth and final Test against Australia in Dharamsala, Pujara created a new record by scoring the most runs in a Test season, breaking the previous mark set by Gautam Gambhir eight years ago.

"Pujara has been a silent warrior, terrific temperament, and somebody again who (is) dedicated, disciplined and focused. I have seen him from close quarters and I was impressed with what I saw, I knew that this guy is there for long time," said Tendulkar.

Pujara's knock of 202 in the Ranchi Test against Australia turned out to be the longest innings by an Indian in the five-day format. Prior to that, a 92 in the second innings of the second Test in Bengaluru played a key role in India's win.

Tendulkar heaped praise on fast bowler Umesh Yadav for showing up through a long home season.

"The way guys have shown discipline and commitment, 13 Test matches in a row, I don't remember anything like that happening during our periods and someone like Umesh (Yadav) have played 12 of them, so for a fast bowler it is really taxing, that shows that you are going to work on your body," Tendulkar told reporters late last night here.

The veteran of 200 Tests added, "Umesh is a kind of a bowler who keeps getting better with time, the more he bowls the better he gets. And you could see that, the last innings of the season that he bowled was possibly the best spell," said Tendulkar.

The 29-year-old pacer from Vidarbha picked up 17 wickets in four Tests against Australia.