Australian cricketerS’ Association voices concern over the Welfare of Trio. 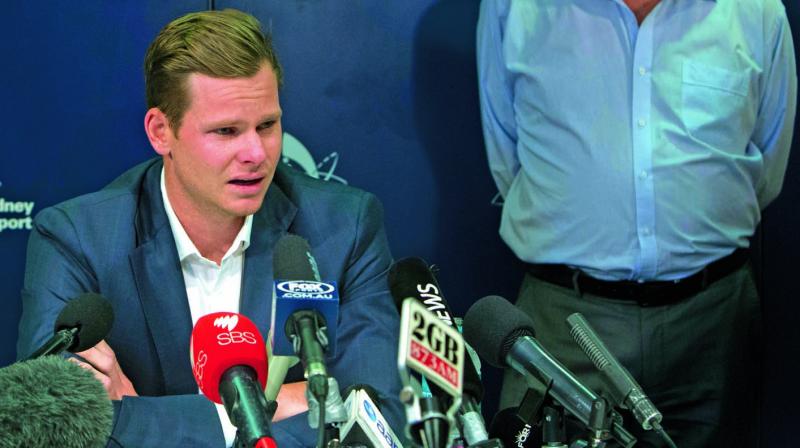 Former Australia captain Steve Smith speaks to the media as his father Peter looks on.

Sydney: A wave of sympathy for disgraced Australia skipper Steve Smith gathered pace on Friday after his heart-wrenching apology and as opposition grew to the severity of bans handed out in a ball-tampering scandal.

Smith’s tearful appearance in front of media helped trigger the resignation of coach Darren Lehmann and also prompted calls to rein in criticism which has verged on hysterical during an extraordinary week for Australian cricket.

Both Smith and vice-captain David Warner were banned for 12 months and Cameron Bancroft for nine months for ball-tampering during the third Test in Cape Town.

Lehmann — who had earlier warned about the players’ mental state — said he was convinced to step down by the emotional apologies of Bancroft and Smith, which also drew messages of support.

“Dear Australia, that’s enough now,” ran a headline in British newspaper the Times. “This was ball-tampering, not murder.”

The ball-tampering scandal has unleashed a torrent of vitriol against Smith and Warner in particular, and heavy criticism of a team long perceived as arrogant and out of touch.

Australia’s leg-spin great Shane Warne wrote in Sydney’s Daily Telegraph: “We are all so hurt and angry and maybe we weren’t so sure how to react. We’d just never seen it before.

“But the jump to hysteria is something that has elevated the offence beyond what they actually did, and maybe we’re at a point where the punishment just might not fit the crime.”

Former England captain Michael Vaughan said Smith and Bancroft, who also faced media on Thursday, were “decent guys who had a moment of madness”.

“They deserve a 2nd chance and hopefully get the right support around them now .. Takes a lot guts to do what they did today,” he tweeted.

The Australian Cricketers’ Association voiced concern over the welfare of the players, and argued that the sanctions were disprop-ortionate.