IPL 2019: DC wins against KKR in a nail biting super over finisher

Delhi posted a target of 11 runs in super over and the KKR was only able to score seven runs which handed over the victory to the host. 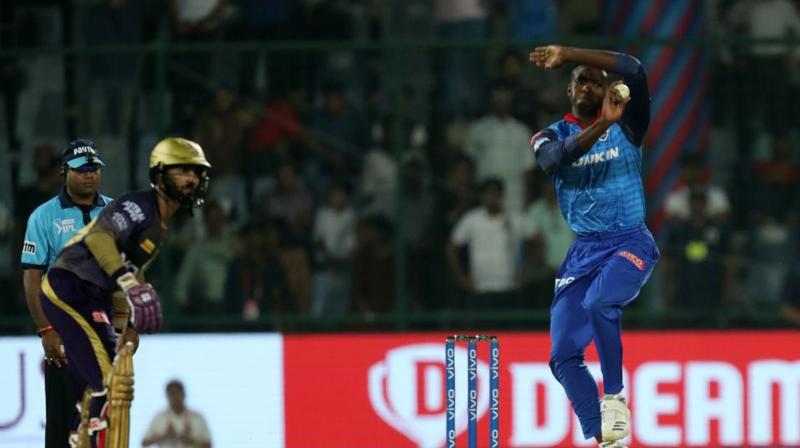 Earlier Delhi’s Shikhar Dhawan and Prithvi Shaw opened the innings but got a quick blow as Piyush Chawla dismissed Shikhar Dhawan. Both played some really quality shots and stitched an 89-run partnership before Iyer (43) was caught by Shubman Gill off Russell’s delivery. (Photo: BCCI)

New Delhi: Capitals did not disappoint fans at home as they won the match by three runs in an electrifying super over against Kolkata Knight Riders here on Saturday.

Delhi posted a target of 11 runs in super over and the KKR was only able to score seven runs which handed over the victory to the host.

Both played some really quality shots and stitched an 89-run partnership before Iyer (43) was caught by Shubman Gill off Russell’s delivery.

Shaw was then joined by wicket-keeper batsman Rishabh Pant, who was also sent to pavilion swiftly by Kuldeep Yadav. Shaw showed a flabbergasting form as he scored his career-best 99 runs but missed his maiden ton.

Though Shaw’s innings had set the stage for Colin Ingram and Hanuma Vihari, Vihari too was sent to the pavilion on the second last ball of the match. The match was then dragged to the final delivery and Delhi Capitals still requiring two runs to win but Ingram could only manage to score a single run taking the match to a Super Over.

Delhi Capitals won the toss and elected to bowl first. KKR had a botched start as they were unable to stitch any good partnership. Sandeep Lamichhane gave Delhi Capitals an early breakthrough by dismissing Nikhil Naik. Fall of wickets did not stop there as three more wickets fell in the name of Robin Uthappa, Chris Lynn and Nitish Rana making it four wickets with just 44 runs on the scoreboard.

Shubman Gill and Dinesh Kartik played steadily but both players’ rapacity to add more scores to the scoreboard made them run for an ‘unnecessary’ extra single which got Shubman Gill run out.

With that run-out, half of the team went back to the pavilion, and then came out this season’s game-changing batsman, Andre Russell, who propelled KKR innings by scoring 62 runs off just 28 deliveries.

While doing so, Russell crossed his 1000-run milestone in IPL and also surpassed David Warner’s this year aggregate to bag the orange cap, a cap which is entitled to the player with most runs in the on-going season. Kartik and Russell both stitched a 95-run partnership which KKR desperately needed.

Delhi Capitals got a bit of relief when Chris Morris and Amit Mishra got wickets of set batsmen Russell and Kartik, but both the players were already done with what they intended to do and helped KKR post a respectable total of 185 runs.

Delhi will not face Kings XI Punjab on Monday while KKR will face Royal Challengers Bangalore on April 5.