Sports   Cricket  31 Mar 2019  'Kagiso told me that he would go for yorkers all through', discloses Shreyas Iyer
Sports, Cricket

'Kagiso told me that he would go for yorkers all through', discloses Shreyas Iyer

Iyer admitted he never expected the match to go into the Super Over with Delhi needing just six runs in the final over. 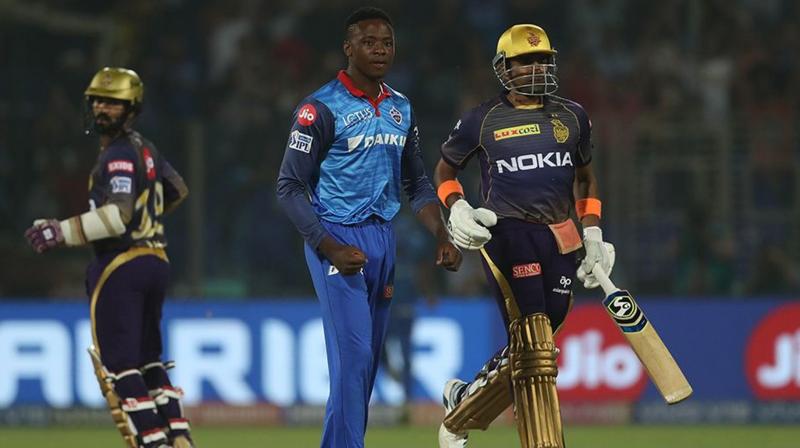 Rabada helped Delhi Capitals defend the lowest total in a Super Over in IPL history as they won by three runs after both teams ended up scoring 185 in the allotted 20 overs each. (Photo: BCCI)

New Delhi: Delhi Capitals skipper Shreyas Iyer said his pacer Kagiso Rabada promised to bowl only yorkers to defend the 10 runs in the Super Over and bail the team out of trouble against Kolkata Knight Riders.

Rabada helped Delhi Capitals defend the lowest total in a Super Over in IPL history as they won by three runs after both teams ended up scoring 185 in the allotted 20 overs each.

Heaping praise on the South African, Iyer said, "Kagiso and I had a chat before the Super Over and he told me that he would go for yorkers all through, first, second, third, every ball. It takes some special skill to execute that."

Iyer admitted he never expected the match to go into the Super Over with Delhi needing just six runs in the final over.

"Definitely a long day at the office. We didn't expect it to go that deep, expected us to finish it with an over to spare," Iyer said after his side won the match in Super Over.

"Credit must go to Kuldeep Yadav for that over (last over)."

Talking about KKR's swashbuckling batsman Andre Russell, who scored 62 off 28 balls, Iyer said, "You can't control Andre Russell when he gets going. Even his mistimes go for sixes and even the bowlers find it tough to plan against him when things just don't go to plan."

Delhi Capitals were set up nicely by Prithvi Shaw's 99 off 55 balls and Iyer applauded the youngster's efforts.

"All our batters decided that whoever gets going should take the side home, and Prithvi Shaw did that for us. Hopefully he can continue doing it for us. I am really happy with myself as well because I refused to let the pressure come onto me after a few dots."

Rabada, on his part, said he was glad that he managed to held on to his nerves.

"I just saw it as a simulation and glad it paid off. You have to keep your wits about you and be really clear on what you have to bowl. I just went with yorkers and it worked in the end. I was clear and backed my plan."

Shaw, who was adjudged the man of the match, said, "I thought I missed the opportunity to finish the game. Rather than scoring one run, I was looking to hit it big because I didn't want the game to get this close. But the boys finished it off really well in the Super Over.

"I spoke to my support-staff, Ricky, Sourav, Praveen Amre and I figured out that I was going a little too hard early."

He said the pitch changed a bit as the bowlers' marks opened up.

"Kuldeep and Piyush were getting good turn. Batting became difficult, but we were looking to pick the singles and doubles. We have 10 more matches to come and I am hoping to continue with the same intensity in the rest of them as well."

"I think it was a great game, both teams fought pretty well. It went to the Super Over and they came out on top.

"I think Prasidh (who bowled the Super Over) has been bowling consistently for us at the death, it was a straight forward decision to make. And I think he bowled really well. He has been bowling the tough overs, so we need to back him. It was a topsy-turvy kinda game."