India dominated the first Test from the outset to win by 304 runs with a day to spare in Galle. 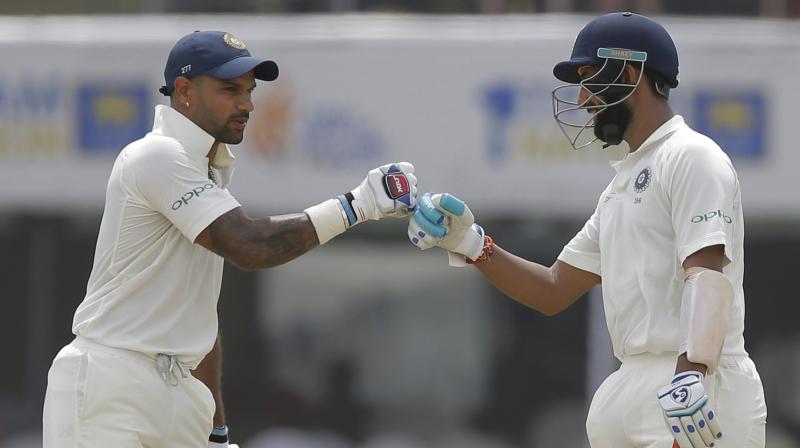 India's Cheteshwar Pujara, right, and Shikhar Dhawan cheer at each other during the first day's play of the first test cricket match between India and Sri Lanka in Galle. (Photo: AP)

Galle: India’s thrashing of Sri Lanka in the first Test has left captain Virat Kohli with a “massive” yet welcome headache as he ponders his team selection for the next match.

India dominated the first Test from the outset to win by 304 runs with a day to spare in Galle. The tourist’s top order batsmen fared well, with Shikhar Dhawan making 190 in the first innings and fellow opener Abhinav Mukund contributing a quickfire 81 in the second.

Cheteshwar Pujara also blasted 153 batting at three in the first innings while Kohli chipped in with an unbeaten 103 batting at four in the second. The success of the top four batsmen however leaves Kohli and coach Ravi Shastri with a dilemma ahead of the second Test, starting in Colombo on Thursday.

Regular opener Lokesh Rahul missed the match in Galle because he was suffering from the flu but is expected to be available for the next game, meaning someone has to miss out. “Yes, it’s a very tricky situation,” Kohli admitted. “We’ve got all four openers firing now.

“Shikhar was supposed to go to Melbourne, now he’s got a 190 in Galle. So, anything can happen in life. “It’s a massive headache but I guess a good one. You know, eventually guys understand that only two can take the field and at most two or three openers make the squad.”

Kohli was careful not to pre-empt any picks and hoped whoever missed out would not be too disappointed. “We’ll have to eventually take a call on who plays in the next Test and I’m sure the third guy will understand whatever the call is taken by the team,” the skipper said.

Dhawan was a late inclusion for the series opener, replacing the injured Murali Vijay, but made the most of his chance with his career-high 190. “My plans were to go to Melbourne and spend time with my family, do training and get fit for the one-day series,” he said.

“I was in Hong Kong actually on holiday and from there I flew back to India and joined the team. That was my plan and I think destiny had a different plan for me.” Kohli was also happy with the bowlers’ performance, particularly Ravichandran Ashwin and Ravindra Jadeja.

The Galle pitch favoured batting, with India piling on 600 and 240/3, but the Indians twice bowled out the home side for less than 300. “We are able to capitalise in those situations and really put more pressure on the opposition,” Kohli said.

“I would say that we really exectuted our plans well to force the opposition to make mistakes regularly.” Sri Lanka’s stand-in captain Rangana Herath insisted his team were better than the lopsided result of the first Test indicated.