Ravi Shastri says why he prefers Jadeja over Ashwin

Ashwin has always been found wanting on flat tracks outside the sub-continent. 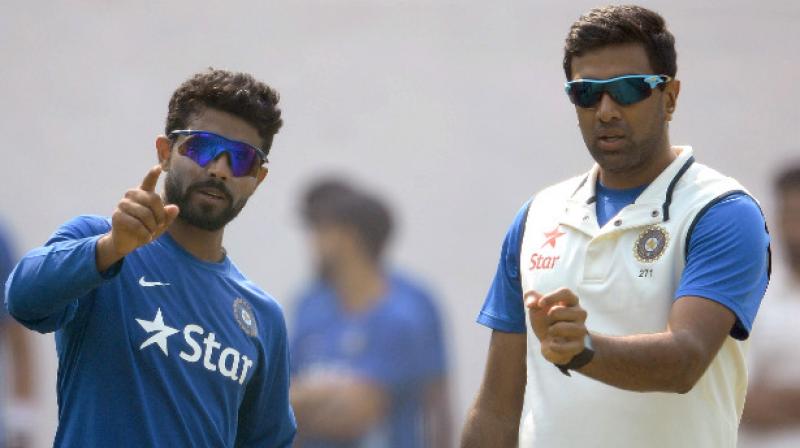 On his selection in the first Test, Shastri said that Jadeja's ability to bowl on a damp wicket in the first session of a Test match was factored in. (Photo: AFP)

Kingston: Ravindra Jadeja's improved batting and more control on a flat deck has prompted his selection ahead of a champion bowler like Ravichandran Ashwin in the playing XI against the West Indies, India's head coach Ravi Shastri said on Saturday.

Jadeja's selection in the playing XI ahead of Ashwin, who had a proven record against the West Indies, "astonished" none other than Sunil Gavaskar but the all-rounder silenced everyone with an under-pressure half-century and a couple of wickets in the first Test.

"Look at Jaddu, his record is fabulous. You have to see what he brings to the table. He is probably best fielder in the world now and he has improved his batting like hell," Shastri told former England spinner Graeme Swann during an interview for hosts broadcaster "Sony".

Ashwin has always been found wanting on flat tracks outside the sub-continent. While Shastri didn't speak about the Tamil Nadu off-spinners weakness but did speak about what stood out for Jadeja as a spinner.

"And if you see these tracks (North Sound and Kingston). From what I have seen of this track (Kingston), I don't think there would be much on offer for the spinners where you would need control," said Shastri.

On his selection in the first Test, Shastri said that Jadeja's ability to bowl on a damp wicket in the first session of a Test match was factored in.

"The reason why we picked Jadeja in the first Test, was in case we fielded, and the track was damp, with his pace, he would have made life little awkward for the batsmen. He could have been used on the first session of play on Day One.

"That was the reason why we picked Jadeja even though Ash (Ashwin) is a world-class spinner. It is a difficult decision to leave out Ashwin or Kuldeep (Yadav)," said Shastri.