Virat Kohli signs autographs for fans and spends time with them; watch

After stumps on day one, he was seen signing autographs for the fans waiting for him. 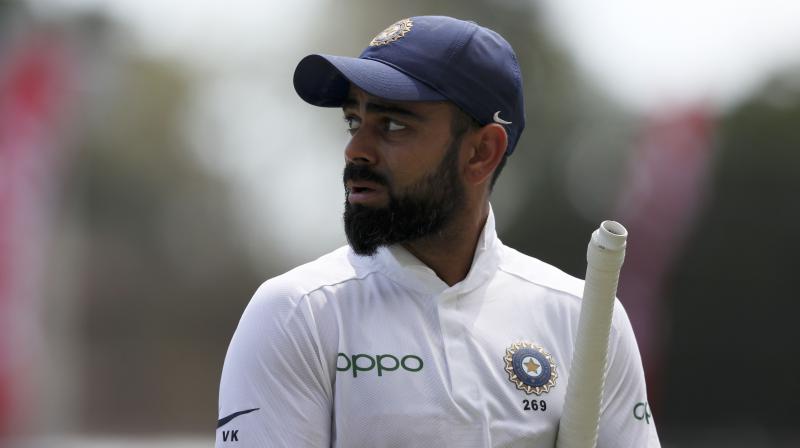 The Board of Control for Cricket in India (BCCI) shared the video on their Twitter handle on Saturday. (Photo: AP)

Mumbai: Team Indian skipper Virat Kohli keeps winning hearts on field and is also known to be a heart-warmer off-field. On the first day of the second Test against West Indies, Virat Kohli showed why he is adored by fans.

After stumps on day one, he was seen signing autographs for the fans waiting for him. While signing he also interacted with them in a jovial fashion and made sure that each fan received his autograph.

The Board of Control for Cricket in India (BCCI) shared the video on their Twitter handle on Saturday.

India posted a score of 264/5 on day one of the second Test of the two-match series against West Indies here at Sabina Park on Friday.

Kohli brought up his half-century in the 55th over of the innings, and he along with Rahane ensured the team does not lose any more wickets before the tea break. India reached the score of 157/3 at the time of tea.

Immediately after the tea break, Kemar Roach had Rahane (24) caught at the hands of the wicket-keeper in the 60th over, reducing India to 164/4.

Vihari next came out to bat and he along with Kohli, put up a 38-run stand, but as soon as the partnership started flourishing, Kohli (76) was dismissed by Holder, reducing India to 202/5. This saw Pant join Vihari on the field.

Both Hanuma Vihari and Rishabh Pant remained unbeaten on 42 and 27 respectively at the close of play on day one.