Sports   Cricket  31 Oct 2019  Sourav Ganguly: 'We will get Shastri involved in NCA till time he is coach'
Sports, Cricket

Sourav Ganguly: 'We will get Shastri involved in NCA till time he is coach'

Ganguly's prospective move to have Shastri in a dual role could well be an aim to create a synergy between national team and NCA. 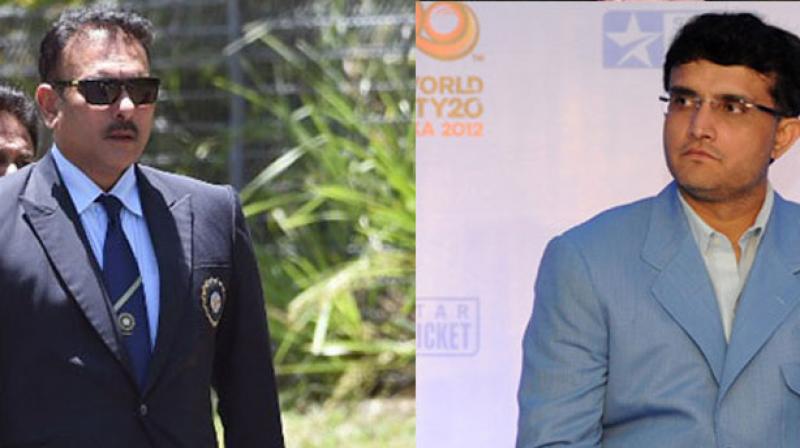 Sourav Ganguly said that Ravi Shastri is doing well as the coach even though Indian needs to address the problem of not being able to cross the final hurdle at the global events. (Photo: AFP)

Kolkata: BCCI president Sourav Ganguly on Thursday said that senior team's head coach Ravi Shastri will be asked to get "more involved" in grooming talent at the National Cricket Academy "till the time he is coach".

Ganguly's prospective move to have Shastri in a dual role could well be an aim to create a synergy between national team and NCA.

Shastri has now had a new contract till 2021 World T20 but his terms of the agreement are only working with the Indian team with an annual salary of Rs 10 crore.

"We will also create a system where Ravi's involvement is more at the NCA till the time he's the coach. We will make it a good Centre of Excellence. We have Rahul Dravid, Paras (Mhambrey) and Bharat Arun also go there," Ganguly said at the Eden Gardens.

However, Ganguly said that Shastri is doing well as the coach even though Indian needs to address the problem of not being able to cross the final hurdle at the global events.

"He's done well with the side. He will be with us for the next two years. As I said, India need to win a world tournament. They have the ability.

"They reached the CT in 2017 when they lost to Pakistan in the final and then lost in the World Cup semifinal. It's a great side and just need to get the last hurdle through. We will deal with it when it comes."

Once considered to be a finishing school of Indian cricket, NCA in the last decade had become a rehabilitation centre.

Ganguly along with other office-bearers had a meeting with the NCA staff including Rahul Dravid and COO Toofan Ghosh, who gave an elaborate presentation.

Asked about his meeting with Dravid, Ganguly said: "It was good. He's the head of NCA and one of the greats of Indian cricket. Basically, we wanted to know about the functions of NCA. We are building a new NCA.

"The meeting went for about two hours. I met him separately and found out what is the way forward. I think they do a lot of good work."

The BCCI had been trying for over a decade to move the NCA out of the premises of the M. Chinnaswamy Stadium. In 2017, it finally completed the purchase of 40 acres of land, in the Devanahalli Aerospace Park area.

"A lot of work goes in the NCA. It is right in the heart of the city in Bangalore and we won't get a location like this. I think KSCA does help a lot and don't even charge a penny from BCCI for using those facilities.

"They've done a lot of good work with the junior and senior teams. The bigger space will be better. Once that's complete, NCA will get a lot bigger," Ganguly said.