Chhetri who received a standing ovation as he departed late in the game having wrapped it up before Miku completed the rout. 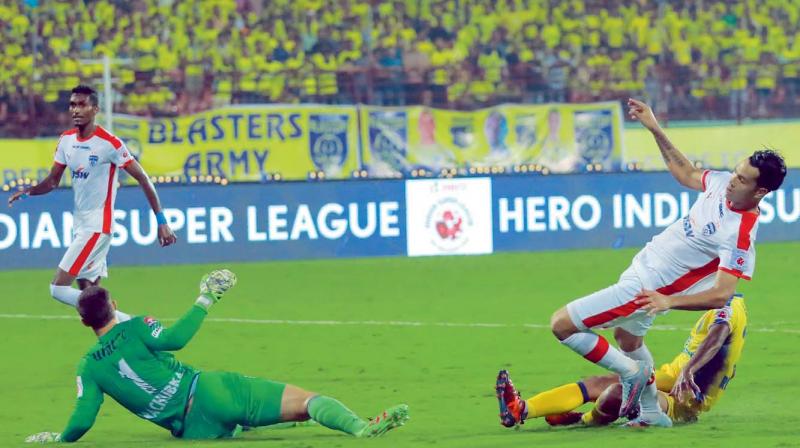 Kochi: Miku struck a late brace as Bengaluru FC posted a thumping 3-1 win over Kerala Blasters in their Indian Super League match at the Jawaharlal Nehru Stadium here on Sunday.

Sunil Chhetri put the visitors ahead from the penalty spot in the 60 minute and his Venezuelan strike partner gave a great account of his poacher instincts, with two strikes in injury time that was followed by a Courage Pekuson consolation just before the final whistle.

Bengaluru were third in standings with 15 points while Kerala remained rooted to the bottom half with seven points from as many outings.

C.K. Vineeth’s absence from the XI — presumably with a groin injury sustained during training — was ominous enough for the home side. Without their top scorer, whose penchant for match-winners and late equalisers had given the two-time finalists a lifeline more than once in the ongoing campaign, Rene Meulensteen’s side were a mere shadow of themselves.

Bengaluru began ferociously, overpowering Kerala with their physicality. Albert Roca’s men were intimidating at times and the hosts struggled to come up creative ideas.

In their bid to avoid a third straight loss Bengaluru were inspired and Subhasish Roy Chowdhury, on his first appearance in the Kerala goal, was pestered with a series of attempts. The plot didn’t loosen after the break.

Roy was again summoned, making a fine low save to keep out Chhetri. But the former Kolkata keeper could not fend off the Bengaluru skipper from the penalty spot soon after. Chhetri had won the spot kick himself after his cross for Garcia had brushed the arm of Sandesh Jhingan.

Chhetri who received a standing ovation as he departed late in the game having wrapped it up before Miku completed the rout.