For Everton, it was a grim extension of their miserable record at Anfield, where they last won in 1999. 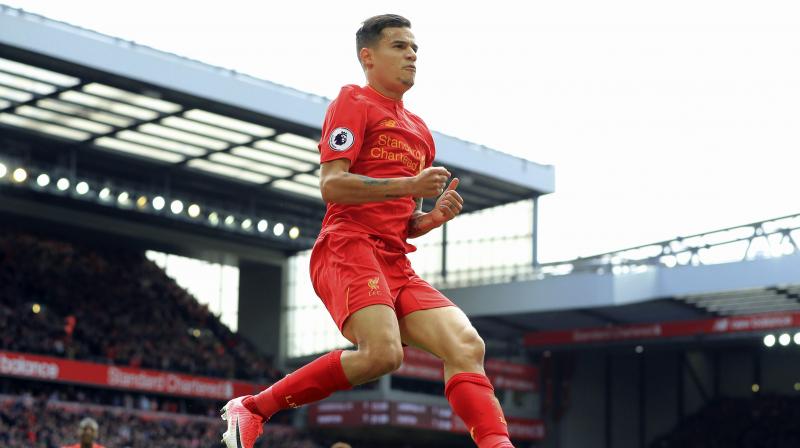 Philippe Coutinho was the beneficiary, unleashing a shot that Robles punched up into the air, with captain Phil Jagielka heading the ball away as it dropped towards goal. (Photo: AP)

Liverpool: Philippe Coutinho starred as Liverpool responded to Everton's threat to their Champions League aspirations with a commanding 3-1 victory in the 228th Merseyside derby on Saturday.

Divock Origi added a third mid-way through the second half just three minutes after replacing the injured Mane as Liverpool, for a few hours at least, soared to third in the Premier League table.

For Everton, it was a grim extension of their miserable record at Anfield, where they last won in 1999, while Liverpool completed a first double of derby wins since 2010-11.

Everton came into the match in good form, with just one defeat in 12 league matches since Mane's 97th-minute goal secured Liverpool a 1-0 win in December's reverse fixture at Goodison Park.

Victory for Everton at Anfield would have reduced the gap between the side to just three points -- down from 14 at Christmas -- but that never looked likely.

Mane opened the scoring just eight minutes in with a special goal.

He spun neatly around his Senegal team-mate Idrissa Gueye's slide challenge on the halfway line, played a neat one-two with Roberto Firmino and then carried the ball across the Everton penalty area on a diagonal run.

It might have been worse for the Blues after 19 minutes when Everton's youthful right side retreated again.

This time Coutinho was the beneficiary, unleashing a shot that Robles punched up into the air, with captain Phil Jagielka heading the ball away as it dropped towards goal.

It was a shock when Everton got back on terms in the 28th minute and the identity of the goalscorer was even more of a surprise.

Young defender Pennington had not featured in an Everton line-up since last May, let alone score a goal.

But having come in for leg break victim Seamus Coleman, he was the beneficiary when Leighton Baines's first corner of the afternoon created panic in the Liverpool penalty area.

Jagielka headed on, Ashley Williams challenged Coutinho inside the six-yard box and the ball broke loose for a gleeful Pennington to pounce in front of the Kop.

He celebrated with the relish of a young man who had never scored a top-flight goal before. But derbies can be cruel occasions.

Barely three minutes later Coutinho outwitted him on the edge of the Everton penalty area and curled in a delicious second to restore the hosts' advantage.

Everton manager Ronald Koeman opted against making changes at half-time and his faith was almost justified when Everton threatened an equaliser.

Liverpool suffered an injury blow when Mane limped off after 57 minutes, having hurt his left leg in a collision with Baines.

But his replacement, Origi, had only been on the pitch three minutes when he wrong-footed Robles completely with a vicious right-foot shot from Coutinho's pass.

Koeman finally made a switch, introducing the experience of Gareth Barry and Enner Valencia for Tom Davies and Pennington, but one misdirected Dominic Calvert-Lewin header aside, Liverpool were comfortable.

Substitute Trent Alexander-Arnold almost made it a rout, but his clipped shot from Emre Can's cut-back was spectacularly pushed away by Robles.