Liverpool are on 79 points with Manchester City, who won at Fulham on Saturday, on 77 points but with a game in hand. 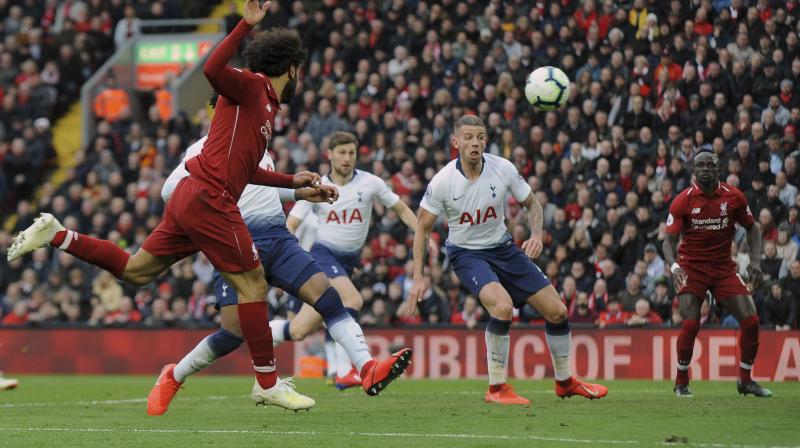 Spurs keeper Hugo Lloris parried out a back post header from Mohamed Salah but the ball struck the unfortunate Belgian central defender and rolled over the line in the 90th minute. (Photo: AP)

Liverpool secured a last-gasp 2-1 win over Tottenham Hotspur thanks to an own goal by visiting defender Toby Alderweireld to maintain their lead at the top of the Premier League.

Liverpool are on 79 points with Manchester City, who won at Fulham on Saturday, on 77 points but with a game in hand.

Spurs keeper Hugo Lloris parried out a back post header from Mohamed Salah but the ball struck the unfortunate Belgian central defender and rolled over the line in the 90th minute.

It was a stroke of luck for Liverpool and one which sent Anfield wild with relief as a draw would have handed the advantage in the title race straight to Pep Guardiola’s side.

Questions will be asked of Lloris’s failure to smother the ball or push it away from danger but it was a cruel end to a strong second half display from Tottenham who are now level on 61 points with fourth-placed Manchester United.

Roberto Firmino opened the scoring in the 16th minute getting between the Spurs central defenders to meet a perfectly shaped cross from left-back Andy Robertson with a firm header.

Juergen Klopp’s side looked to quickly add a second but while they roared forward and had Tottenham’s defence shaking, their shots on goal were limited.

Tottenham recovered and were well on top after the break. It was no surprise when they drew level — Harry Kane swinging a wonderful cross-field pass to Kieran Trippier whose low ball was flicked on by Christian Eriksen and Lucas Moura drove home the loose ball.

Spurs could have made it even worse for Liverpool five minutes from the end but Moussa Sissoko, looking far from composed, blasted over at the end of a dangerous counter-attack.

Then came the late winner — a half-cleared corner was returned by Roberton deep to the far post and Salah’s header was pushed out by the French keeper against Alderweireld’s shins and into the net.

“It’s a massive result for us,” said Roberton

“The first half an hour we blew them away without getting a second goal. We got a wee bit sloppy and, to be fair, Spurs have beaten us comfortably in the second half.

“But we fought right to the end and it’s all about three points,” added the Scotsman.

Moura was dejected, noting Spurs had failed to take their opportunities to win the game.

“It is very hard to lose like this. We played very well. At this level of game we cannot make some mistakes and we had chances to win the game,” said the Brazilian.