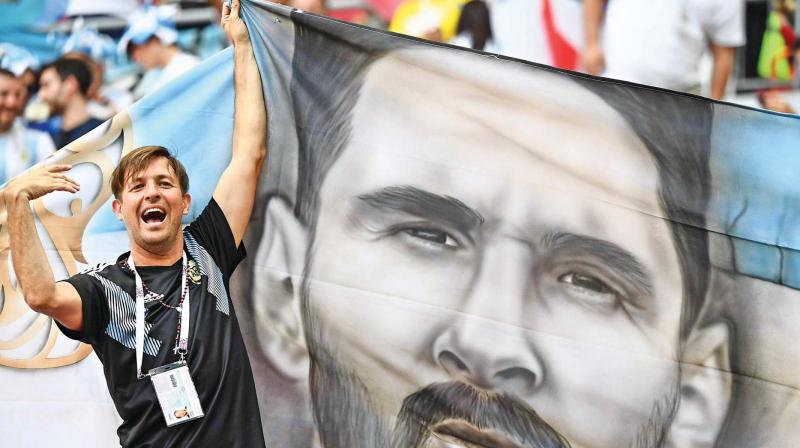 A fan holds a flag with a painting that resembles Lionel Messi at the Kazan Arena. (Photo: AP)

Kazan: Not surprisingly, Lionel Messi supporters has monopolised Kazan ahead of Argentina’s last 16 match against France. Although a cheeky fellow has bathed a wall near the Argentina hotel with the mural of Cristiano Ronaldo, the love for Messi here is immense. A Russian law student said he was an ardent fan of Messi as he got into a free shuttle to the stadium with full of excitement.

If you go by the number of Argentine fans who thronged the Kazan Arena on Saturday, you would tend to believe that the South American country is nearer to Russia than France. The collective prayer of neutral fans is also fully behind Messi and his team as they attempt to topple Les Bleus in the last 16.

An Armenian fan said he was in Russia for Messi alone. He has inked his loyalty to the Argentine superstar with a tattoo on his right arm in which Messi is depicted as a lion. From Kerala and Kolkata, Messi rules, as he also does in entire Bangladesh.

Although it is amply clear that love for Messi is universal, Armenian journalist Karen Rafayelyan said in Europe fans are more inclined to follow a player based on the club he plays for. “For example, Real Madrid are wildly popular in Armenia, so football fans tend to support Ronaldo ahead of Messi,” he added.

“In our country, Manchester United is all the rage. So a lot of fans like Ronaldo more, as he is a former Red Devil,” she said.

Jorge Fabian Galdi of Argentina said the older generation still reveres Diego Maradona back home. “People in their 20s and 30s love Messi more. But Messi’s failure to win the World Cup for Argentina always sticks out like a sore thumb in debates on his greatness. Some of his fierce critics say he plays better for Catalonia than Argentina. Maradona, on the other hand, still thrives on his 1986 World Cup heroics,” he added.

Wheelchair-bound Mariano Tubois has made the journey to Russia all the way from Argentina to follow the Albiceleste. “I couldn’t go to Brazil, a neighbouring country, in 2014 because of office work. I faced many problems to come here. I hope Argentina extend my stay until July 15,” he said, laughing.

For Tubois, Messi is the greatest football player of his country whether he wins the World Cup or not. “Messi has all the qualities I would like to see in someone who can represent Argentina to the world. He is the perfect ambassador for our country. If his critics say he plays better for Barcelona, I can point out the fact that Maradona played much better for Napoli than he did for Argentina,” he said.

“The comparison between Argentina and Barcelona is absurd because Messi plays for his club throughout the year. And, he is surrounded by world-class team-mates at Camp Nou.”