Scott McTominay's stunning strike to give United the lead was a rare moment of quality in a poor first-half. 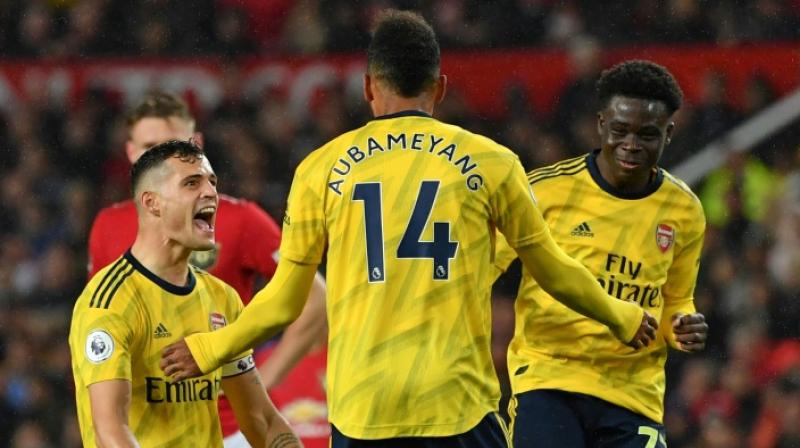 Pierre-Emerick Aubameyang's second-half strike, awarded by VAR, denied Manchester United a much-needed win to kickstart their season as Arsenal emerged from Old Trafford with a 1-1 draw on Monday.

Scott McTominay's stunning strike to give United the lead was a rare moment of quality in a poor first-half.

However, Ole Gunnar Solskjaer's men could not hold out for all three points as Aubameyang's goal just before the hour mark was allowed to stand despite the Gabon international being initially flagged offside.

United have now won just two of their last 12 Premier League games dating back to last season and sit 12 points adrift of leaders Liverpool just seven games into the campaign.

A point is enough to edge Arsenal back into the top four on goal difference and maintain their three-point advantage over United, who move up to 10th.

For many years the clashes between these sides were the Premier League's marquee fixtures. United and Arsenal were the champions of England for nine consecutive seasons between 1996 and 2004.

However, the fact the were facing off a Monday night because neither are in Champions League action later this week was reflected in a first 45 minutes devoid of quality.

It took 28 minutes for either goalkeeper to be tested as Arsenal's Bernd Leno saved well low to his left to deny Andreas Pereira after a solo run.

United have not scored more than one goal in any match since the opening day of the season and, even against an Arsenal defence that had conceded nine goals in their last four league games, looked toothless when not afforded space to counter-attack into.

Arsenal, though, played right into the hosts hands in the final five minutes of the first-half.

Firstly, Marcus Rashford wasted a huge chance when played in behind by Paul Pogba's through ball with the Gunners furiously protesting for a free-kick against the Frenchman as he dispossessed Matteo Guendouzi.

Arsenal then had the chance to strike on the counter-attack themselves as from a United corner the visitors burst forward through Bukayo Saka and after his effort was palmed away by David de Gea, the Spaniard got back in position to block Guendouzi's follow-up effort.

But from the resulting corner, it was United who took the lead.

Daniel James led the counter from one end of the field to the other and after his cross just evaded Rashford, the England international cut the ball back to the edge of the box where McTominay smashed into the top corner.

That was the first goal United had scored a goal from open play at home in the first-half this season.

But they soon needed a second as Arsenal struck back after the break thanks to VAR.

Saka pounced on a loose pass deep inside the United half and fed Aubameyang, who had been flagged offside, before dinking the ball past De Gea.

However, replays showed he was clearly played onside by Harry Maguire and his eighth goal of the season was allowed to stand.

Seconds later, Unai Emery's men were unlucky not to be in front when Saka's shot from Callum Chambers's cross was deflected just over by Victor Lindelof.

Attack looked like the best form of defence for Arsenal as their backline never looked comfortable at holding out for a point.

Pogba fired inches wide from the edge of the area before McTominay somehow didn't score his second of the night with a free header six yards out from a corner.

Leno produced a fine save to turn a piledriver from Maguire over as the world's most expensive defender tried to atone for his earlier error.

But the German goalkeeper's best save of the evening came at the death as he flew to his left to turn Rashford's powerful free-kick to safety.