Southgate was told Croatia coach Zlatko Dalic feared the prospect of going to Wembley right at the beginning of the tournament. 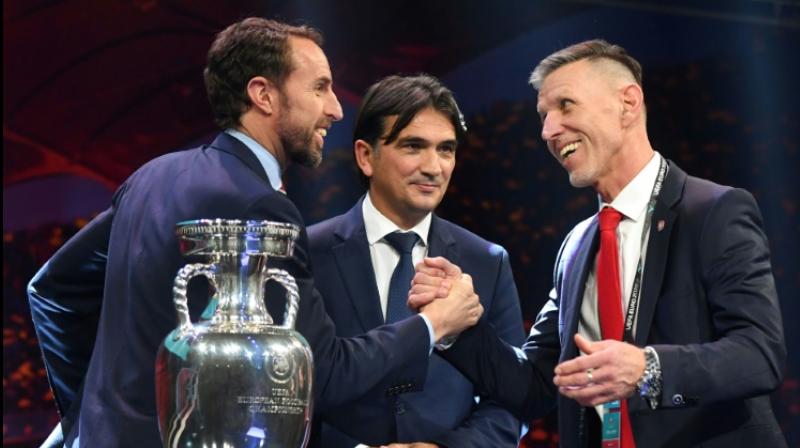 England manager Gareth Southgate waved away suggestions Croatia will be afraid of playing his team at Wembley in their opening game at Euro 2020 after they came out in the same group at Saturday's draw in Bucharest. (Photo:AFP)

England manager Gareth Southgate waved away suggestions Croatia will be afraid of playing his team at Wembley in their opening game at Euro 2020 after they came out in the same group at Saturday's draw in Bucharest.

The teams will face off on June 14 in Group D in what is likely to be a pivotal game in determining who tops the section, which will also include the Czech Republic and a play-off winner.

Southgate was told Croatia coach Zlatko Dalic feared the prospect of going to Wembley right at the beginning of the tournament, with London one of 12 European cities chosen to host matches.

"I think he's been tactically economical with the truth there," was Southgate's response.

England beat Croatia 2-1 at home last year in the Nations League, having drawn 0-0 away.

However, the most significant recent meeting of the nations came in the 2018 World Cup semi-final in Moscow, when Croatia won 2-1 in extra time.

"We have had three really good games, really tight games with them, with very little between the teams all three times," Southgate added.

"I think in the last game in their midfield they left (Chelsea's Mateo) Kovacic on the bench which tells you a little bit about the quality of the players that they have, and it's quite an interesting contrast really.

"They have hugely experienced players, right throughout the team, who have played big matches.

"We are at the other end of the scale, very young, a lot of energy, but still learning and improving."

Southgate was also asked if the match offered a real chance to exact revenge for that painful World Cup exit as England missed out on a first major tournament final since 1966.

"I think you can never make up for losing in a World Cup semi-final unfortunately.

"We felt that after the Nations League. It was great to win that game but it didn't in any way redress it -- if I was the Croatians, I know which game I'd rather have won, so I think that will be long gone, but it is a really attractive fixture for everybody."

England's second game will be on June 19 against a team to emerge from the play-offs next March, either Norway, Serbia, Israel or Scotland.

They will then have a final home group game against another familiar opponent in the Czechs, whom they trounced 5-0 at Wembley in qualifying but lost to 2-1 in Prague.

"They are two teams who we have had really good results against and also poor results, so it is not a group we can be complacent about," Southgate added.

The Czechs will be returning to Wembley, the scene of their defeat by Germany in the Euro 96 final. Southgate will also be forever linked to that tournament after missing a penalty in the semi-final shoot-out loss to the Germans.

England is now preparing to host games at a major tournament for the first time since then, with Wembley also having a last-16 game as well as both semi-finals and the July 12 final.

The problem for England is likely to come further down the line, however.

If they win their group, they will face the Group F runners-up, probably Germany, France or Portugal, in the last 16 in Dublin.

Victory in that game would take them to a Rome quarter-final, possibly against Spain. Finishing second in their group may actually be the preferable path.

"In the end you want to try and win every game you play and at least have control of your destiny," Southgate insisted.