Despite watching them win their first back-to-back league games since April, it was not all good news for Mourinho. 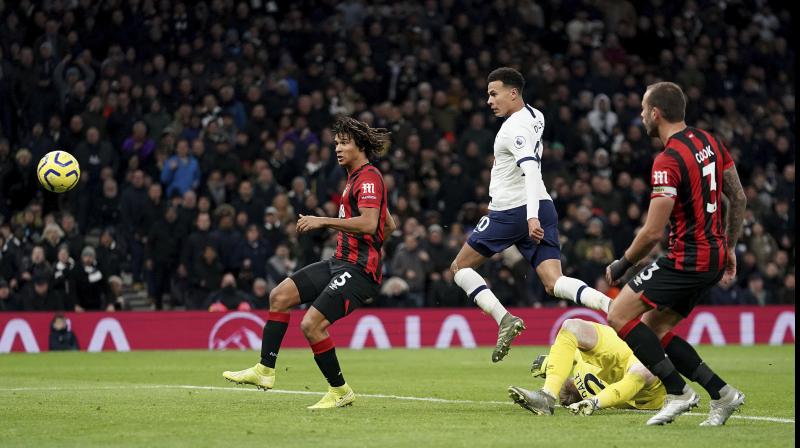 Jose Mourinho’s dream start as Tottenham Hotspur manager continued as Dele Alli scored twice in a 3-2 victory at home to Bournemouth on Saturday — a third successive win for the Portuguese since replacing Mauricio Pochettino. (Photo:AP)

London: Jose Mourinho’s dream start as Tottenham Hotspur manager continued as Dele Alli scored twice in a 3-2 victory at home to Bournemouth on Saturday — a third successive win for the Portuguese since replacing Mauricio Pochettino.

Despite watching them win their first back-to-back league games since April, it was not all good news for Mourinho, though, as his side conceded late goals for the second week running to take the gloss of a commanding display.

Alli, whose struggles so far this season had summed up Tottenham’s dismal start, has looked rejuvenated since Mourinho arrived. He put Tottenham in front in the 21st minute from close range after a long raking ball by Toby Alderweireld was touched into his path by Son Hueng-min.

Shortly afterwards Davinson Sanchez had a goal scrubbed off with VAR deciding he had handled in the buildup. However, Alli doubled Tottenham’s lead five minutes after halftime as he controlled another Alderweireld quarterback-style delivery before calmly dispatching past keeper Aaron Ramsdale.

When Son set up Sissoko to volley home his first Premier League goal since 2017 in the 69th minute, the points looked in the bag but Harry Wilson’s pinpoint free kick gave Bournemouth a lifeline. The winger pounced to score again in stoppage time to provoke some jitters on the home bench.

It was the second week running that Tottenham conceded two late goals after going 3-0 up — mirroring last week’s 3-2 win at West Ham United — while in midweek they were 2-0 down against Olympiakos in the Champions League before winning 4-2.

While Mourinho will be acutely aware that conceding six goals in three games is not sustainable, he has returned some smiles to Tottenham who moved up to fifth spot in the Premier League, six points behind Chelsea.

“I could say we conceded four goals in two games at home but I prefer to say we scored seven goals at home,” he told reporters.

Alli has been a shadow of the player that helped Tottenham to successive title challenges under Pochettino but appears to have his mojo back which is good news for club and country.

The 23-year-old has now scored three goals in three games, including their midweek Champions League win, after scoring just three in 23 appearances before Pochettino’s departure.

Mourinho said pushing him further up the pitch, a position he played in the early days under the Argentine coach, has been key.

“For me Dele is not a midfielder. He needs to be playing where he is, right behind Harry Kane,” he said.

Tottenham’s drastic improvement will be tested at Manchester United on Wednesday, the club that sacked Mourinho a year ago. Win that and talk of a top-four finish will resume.

“I am very happy with many things in the game but I think we have to improve on aspects. I am pleased with the victory, the points and the goals,” he said. “Now we are closer and we have match, match, match for the Christmas period.”