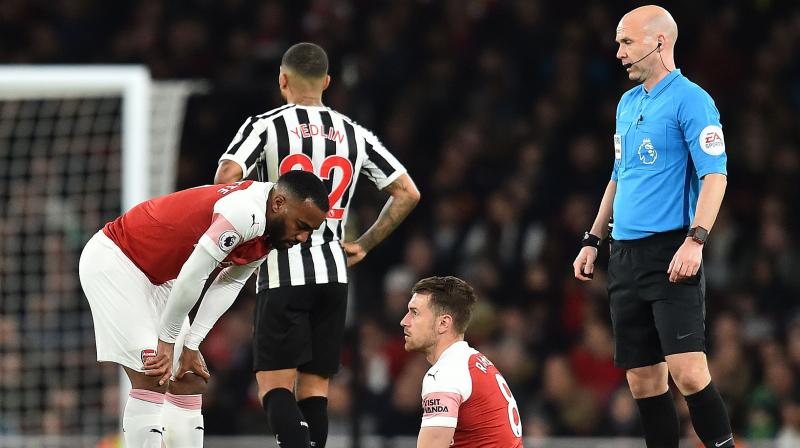 The result lifted them to third place in the Premier League above rivals Tottenham Hotspur and Manchester United. (Photo: AFP)

London: Goals from Aaron Ramsey and Alexandre Lacazette gave Arsenal a 2-0 win over Newcastle United on Monday and lifted them to third place in the Premier League above rivals Tottenham Hotspur and Manchester United.

Ramsey found his way through a packed defence on the half hour to score with a low shot before Frenchman Lacazette put the game to bed in the 83rd minute with a chip over the keeper.

The result put Arsenal on 63 points with seven games left, two above Spurs and Manchester United, with Chelsea a further point behind, as Unai Emery’s side boosted their hopes of a top-four finish and Champions League football next season.

Five of Arsenal’s remaining seven fixtures are away, where they have picked up fewer than half of their points this season, a fact Emery was quick to pick up on after the match.

“Our challenge is away - to be as consistent as we are at home,” the Spaniard told reporters. His players, nevertheless, seem confident that they can return to Europe’s elite club competition for the first time in three seasons.

“I can feel the difference in the atmosphere from last season. Now we can maybe go to the Champions League,” Lacazette told Sky Sports after a convincing win over the Magpies.

Newcastle had not beaten Arsenal since November 2010 and not won away since December and they appeared to set themselves up for a draw at best in North London, with five men in the back line and another four in front of them for most of the game.

The tactics worked until a sweeping Arsenal move in which Welsh midfielder Ramsey found Lacazette and then raced forward into the area to meet the return pass with a sweetly timed left-foot shot that went into the net off the far post.

Arsenal pushed forward repeatedly as the opening period came to a close but failed to finish off any of their moves, with Sead Kolasinac particularly guilty of some wayward passing.

Their best chance came just before halftime when Lacazette latched onto a pass from Mesut Ozil, spun round and lashed the ball goalwards only for Matt Richie to head it off the line.

Lacazette wrapped up the points, however, when Newcastle captain Jamaal Lascelles failed to clear a header into the area from Arsenal substitute Pierre-Emerick Aubameyang.

The Frenchman nipped in behind Lascelles and chipped an inch-perfect ball over Martin Dubravka to seal the win.

Newcastle remain in 14th place on 35 points, seven points above the relegation places, and have six games left.

“For us every game is a final. We should focus, concentrate, not be overconfident,” manager Rafael Benitez told reporters ahead of their next match at home to Crystal Palace on Saturday.