Have raised the bar in two years, says Stephen Constantine

After our international friendly against Nepal, we play the Kyrgyz Republic and they are dangerous opponents, says Constantine. 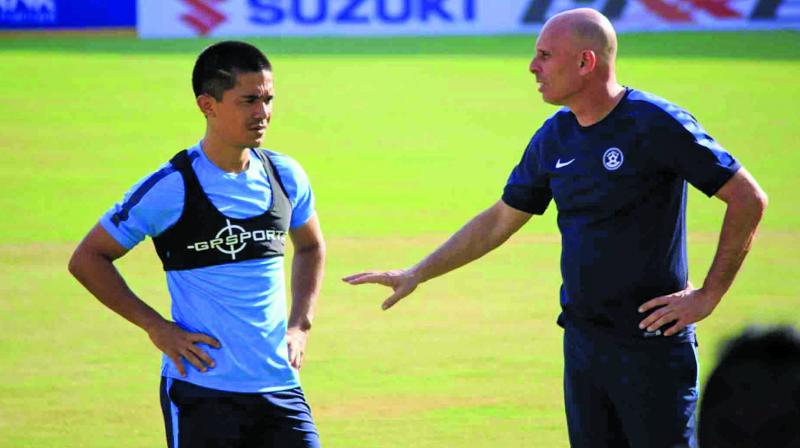 Stephen Constantine along with Sunil Chhetri

National coach Stephen Constantine feels India have been able to “raise the bar in the last two years.” On a day India retained their 100th spot in the latest Fifa rankings, Constantine speaks about the significance of staying in the top 100, the opposition, the current batch and strength of Kyrgyz Republic besides other things. Excerpts:

On the ranking: I understand we have been able to raise the bar over the last two years and that’s what the intent was. However, in the larger scheme of things we have not achieved anything. After our international friendly against Nepal, we play the Kyrgyz Republic and they are dangerous opponents.

On what his wards can achieve: I think the nucleus of this team is there for the next four-five years and right now, we are focusing on the AFC Asian Cup UAE 2019 which is on the top of our priority list.

On his view building up opponents: Some people do feel that I always make the other team look bigger than us. That’s because at the moment we are trying to establish ourselves in Asian football. Once we are perpetually qualifying to the AFC Asian Cup and to the final qualifying stages of the World Cup from Asia, we can start to think and feel we are a big team. We are not there yet but are on the right track.

On the upcoming match: They have some very good players and are well organised. You think of the belt they are coming from and their neighbouring countries — Uzbekistan, Kazakhstan, Tajikistan, Turkmenistan — you will understand that they are all very capable players.

On the kind of support he expects: We are not in any position to underestimate anybody and the entire squad will look forward to the vocal support of the West Block Blues when we play in Bengaluru on June 13 as much we would look forward for the support from the Yellow Brigade when we play Nepal in Mumbai on June 6.