Gnabry is the first player to score 4 goals against English since Lionel Messi achieved the same feat for Barcelona against Arsenal in 2010. 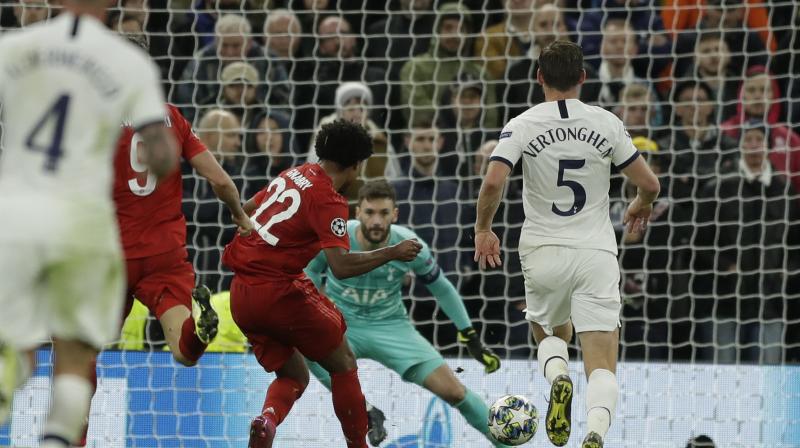 Paris: Serge Gnabry scored four second-half goals as Bayern Munich came from behind to hand last season's runners-up Tottenham Hotspur a stunning 7-2 home defeat in the Champions League on Tuesday after Real Madrid escaped with a 2-2 draw against Club Brugge.

There were routine wins for Manchester City, Paris Saint-Germain and Atletico Madrid, while Cristiano Ronaldo netted in a comfortable Juventus victory, but most of the drama was in north London.

The evening started well for Spurs as Son Heung-min fired across Manuel Neuer and into the far corner to give Mauricio Pochettino's team the lead against Bayern.

However, the German champions came roaring back to leave Spurs on the receiving end of the biggest ever home defeat for an English team in Europe. It was the first time they had ever conceded seven goals in a home game.

Two super strikes from Joshua Kimmich and Robert Lewandowski had Bayern ahead at the break and Gnabry, the former Arsenal winger, then scored two goals two minutes apart to make it four early in the second half.

Harry Kane reduced the arrears from the penalty spot, but Gnabry ran through to complete his hat-trick on 83 minutes and he smacked in the seventh goal after Lewandowski had netted his second of the evening.

Gnabry is the first player to score four goals against English opposition since Lionel Messi achieved the same feat for Barcelona against Arsenal in 2010.

The result means last season's beaten finalists already face a struggle to qualify from Group B after they drew at Olympiakos in their opening game.