Former Gunners’ midfielder Ljungberg was in charge for the first time after Unai Emery’s sacking on Friday. 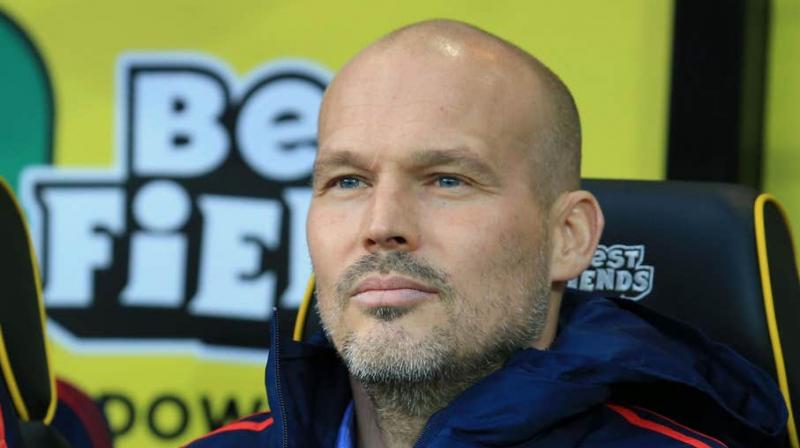 Arsenal’s interim manager Freddie Ljungberg said Arsenal can still finish in the Premier League top four despite a 2-2 draw at Norwich City on Sunday that extended the club’s winless streak in the league to six games. (Photo:AFP)

Arsenal’s interim manager Freddie Ljungberg said Arsenal can still finish in the Premier League top four despite a 2-2 draw at Norwich City on Sunday that extended the club’s winless streak in the league to six games.

Former Gunners’ midfielder Ljungberg was in charge for the first time after Unai Emery’s sacking on Friday and watched skipper Pierre-Emerick Aubameyang twice level for his side.

There were plenty of positives for 42-year-old Ljungberg but Arsenal’s defensive frailties would not have escaped him as struggling Norwich punished the visitors with goals by Teemu Pukki and Todd Cantwell in the first half.

Arsenal are enduring their longest winless league run in a single season since 1994 and are seven points adrift of fourth-placed Chelsea in eighth spot. They have not won in all competitions for eight games but Ljungberg remained upbeat.

“100 percent,” the Swede said when asked if Arsenal could still mount a top-four challenge. “People drop points here and there and we drop points, it’s a crazy league at the moment. I hope and think Arsenal can finish in the top four.”

Ljungberg said ideally he would have “five or six weeks” to get his ideas across to the players but with a home match against Brighton & Hove Albion on Thursday before a trip to West Ham United the following Monday he does not have that luxury.

After Aubameyang’s second equaliser early in the second half it was actually Norwich who looked the more likely winners as the game finished wide open. Ljungberg said tightening up all over the pitch was an area that his side needed to work on.

“We have problems in transitions, and that’s what I will try to fix,” he said, adding that he wanted Arsenal to have more possession and deny their opponents as many chances to shoot.

“I will just try to do small building blocks and try to change things in a slow tempo, so hopefully we can understand it and practice it. But right now we have players who need to recover and we probably only get one and a half (training sessions) again before the next game.

“That’s football, for me I just try to make it as simple as possible for the players and hopefully we can get better.”

While Norwich remain second from bottom, they played with a verve that suggests they can survive in the top flight.

“A draw wasn’t a fair result,” manager Daniel Farke said. “I’m pretty proud of the performance. It was a great day and my players left their hearts on the pitch.”

The Canaries face a huge game away at third-bottom Southampton on Wednesday.

“It will be tough for us and we have to be at our best again,” City’ German coach added. “We have to deliver on a weekly or daily basis in this festive period, that’s what we’re trying to do.”