'In one week or three days we can lose all three titles', said Pep Guardiola. 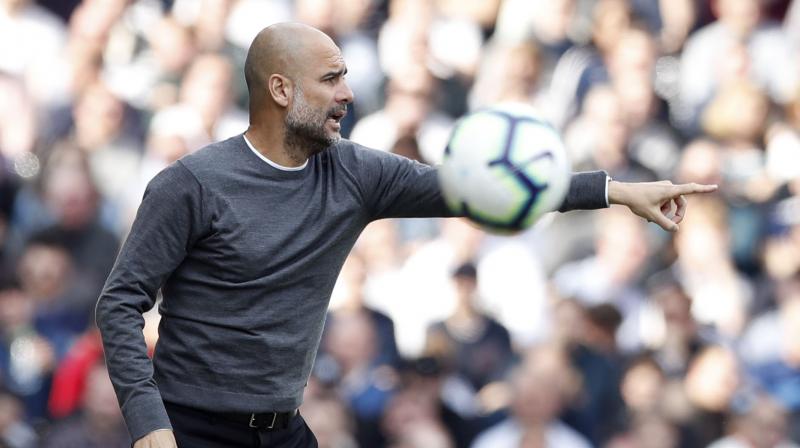 With the League Cup already in the bag, Guardiola’s side are second in the league, two points behind Liverpool but with a game in hand. (Photo: AP)

Manchester City manager Pep Guardiola has told his players to put thoughts of a potential quadruple to the back of their minds and focus on Wednesday’s game against Cardiff City in the Premier League.

With the League Cup already in the bag, Guardiola’s side are second in the league, two points behind Liverpool but with a game in hand, and have reached the quarter-finals of the Champions League and semi-finals of the FA Cup.

While his side have every chance of claiming all three remaining titles still up for grabs, Guardiola said they could just as easily come away with nothing.

“In one week or three days we can lose all three titles,” he told a news conference on Tuesday. “Why talk about the quadruple when in this country - a legendary country - it has never happened before.

“Legendary teams like Liverpool, the period (of Manchester United) with Alex Ferguson, Jose Mourinho at Chelsea, Arsene Wenger with Arsenal - no one did it. So why should we do it?”

Victory over Cardiff would lift City back above Liverpool before they face Brighton and Hove Albion in the FA Cup semis on Saturday. They then face Tottenham Hotspur in the first leg of their Champions League tie on Tuesday.

“I’m not in the minds of my players and the fans to tell them what to think,” Guardiola added. “If they want to dream and think about winning everything, I’m not a guy to say anything.

“Of course we are there but I said to the players, ‘Forget about it, don’t think too much. In one week or three days we can lose all three titles, that’s the reality.

“I know in your heads we can win all the titles, but for now it’s Cardiff."