Spinazzola was stretchered off after 79 minutes and is expected to be sidelined for several months after injuring his achilles tendon. 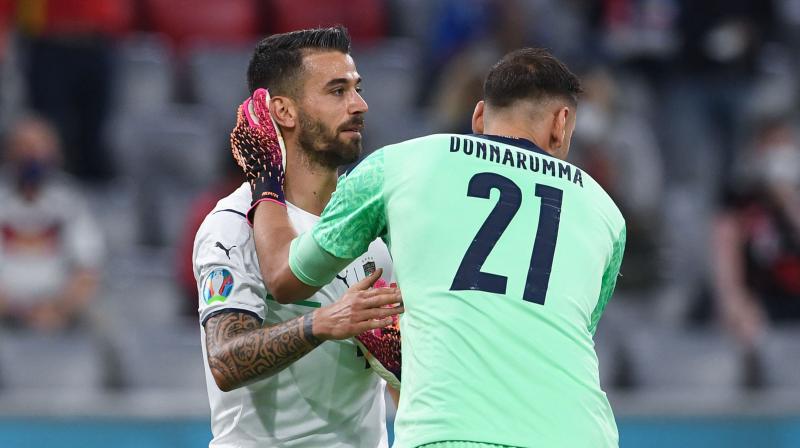 Italy defender Leonardo Spinazzola and goalkeeper Gianluigi Donnarumma interact during the quarterfinal match against Belgium in Munich. The AS Roma defender made a crucial block before suffering an injury which ruled him out of the tournament. (Photo: AFP)

Munich: Lorenzo Insigne says Italy are gunning for Euro 2020 glory in honour of left-back Leonardo Spinazzola, who is out of a tournament he has lit up after injuring his Achilles tendon in the Azzurri's thrilling quarter-final win over Belgium.

Spinazzola, 28, was stretchered off after 79 minutes and is expected to be sidelined for several months.

"It's a great loss for us. We are now trying to go very far -- for him. He was so important for this team," said Insigne, who scored the stunning second goal in Friday's 2-1 win in Munich.

"We'll try to do everything we can to make it to the final for him," he added ahead of Tuesday's semi-final against Spain at Wembley.

A video of the Italian team wildly cheering Spinazzola on the plane ride out of Munich went viral on social media.

"He has played brilliantly, one of the best players at the Euro. It's such a shame, we wish him all the best."

Italy deserved the win in Bavaria as Nicolo Barella gave them the lead in the 31st minute before Insigne added the crucial second with a superb curling strike from outside the area.

Belgium grabbed a lifeline when Romelu Lukaku converted a penalty just before half-time, but the Red Devils could not break the disciplined Italian defence after the break.

Azzurri fans are now dreaming of seeing four-time World Cup winners Italy claim the European Championship for the first time since 1968, with Spain standing in their way in the last four.

"Now we continue to dream, but with our feet on the ground," said defender Leonardo Bonucci.

"We started the European Championship with a dream in the drawer, let's leave it there.

"We have a match against Spain, a national team that didn't look like going all the way, but got back up.

"It will be a great match."

Confidence is high in the camp with Italy extending their national-record unbeaten run to 32 games.

"This is my first important competition and the goal is to go as far as possible in this shirt," said the 22-year-old Donnarumma.

"Let's hope we can make everyone's dream come true. We are an extraordinary group who are not giving up."

"Italy also had an outstanding goalkeeper -- Donnarumma made sure of the win with two or three saves," the 67-year-old Pfaff told AFP subsidiary SID.

"Italy deserved it, they showed from the start that they wanted to win and took the initiative."