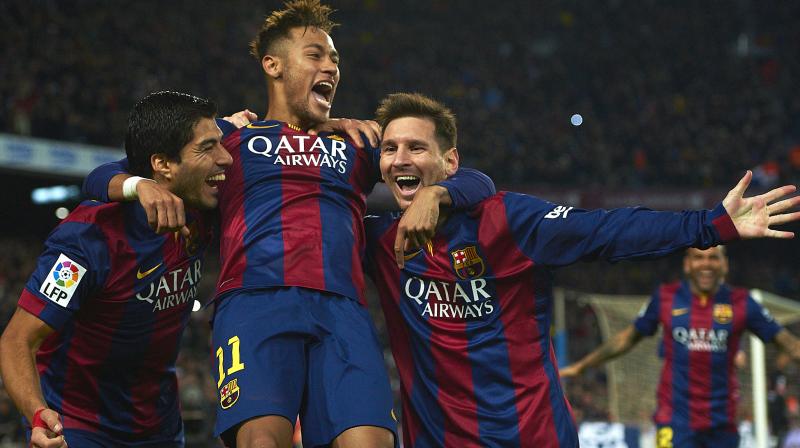 Barcelona: Neymar has responded to Lionel Messi's heartfelt 'goodbye' message on the social media, thereby confirming his exit from Barcelona.The Brazilian took to Instagram shortly after his Barcelona teammate posted a slideshow of pictures of the pair representing the Catalan club over the years.

Messi wrote, "It was an enormous pleasure to have shared all these years with you friend Neymar I wish you luck in this new stage of your life. See you tkm." "Tkm" stands for "te quiero mucho" (I love you loads). "Responding to the message, Neymar wrote: "Thank you brother. I'll miss you mate!"

Earlier, Barcelona announced on the social media that boss Ernesto Valverde had allowed the Brazilian to miss training on Wednesday, suggesting he is all but set to leave.

"Neymar is not training with the permission of the coach," Barcelona's official Twitter account posted.The club later confirmed the player had informed them of his intentions to leave, adding that he would not be training with them for the foreseeable future.

With this, the Barcelona star striker Neymar looks all set to complete a move to Paris Saint-Germain (PSG). Reportedly, Neymar had also informed his team-mates that he is intended to leave the club and is seeking his future elsewhere.

Meanwhile, Neymar's agent, Wagner Ribeiro, is in Paris and is reportedly close to reaching the release clause for the footballer of €222 (£198m), which will make the Brazil striker the world's most expensive player.

It seems that Barcelona were already prepared for Neymar's exit as they have been looking for potential replacements from the last few months with the likes of Liverpool's Philippe Coutinho and Juventus forward Paulo Dybala, who is also a close friend of the club's another star striker Lionel Messi.

However, the main target of the Catalans is Borussia Dortmund forward Ousmane Dembele, who is expected to sign a deal of worth around £70m.

The star forward, who joined Barcelona in 2013, has scored 105 goals for Barcelona, guiding them to two league titles, three Copa del Rey titles and a Champions League crown.

Neymar is also part of Barcelona's 'MSN' strikeforce, which also features Lionel Messi and Luis Suarez. In the past three seasons, the trio went on to score 250 goals between them in 299 appearances they made.

His best goal-scoring season came in 2014-15, when he netted 39 times in helping Barca to the treble under Luis Enrique.