Chelsea are third on three points behind second-placed Valencia who beat the Premier League side in the opening round of matches. 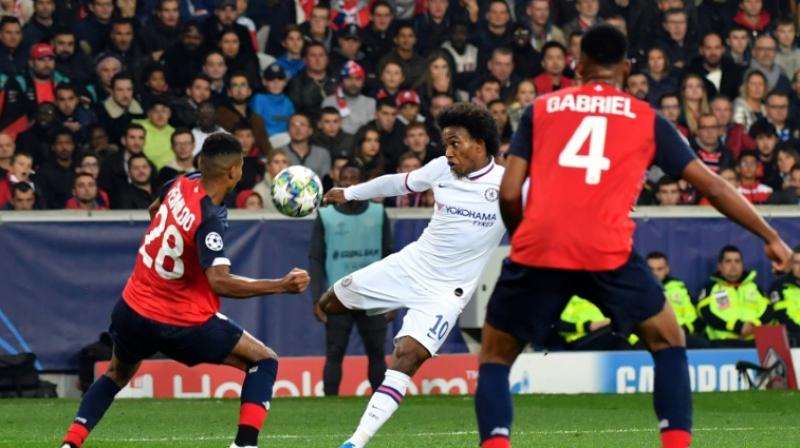 Brazilian Willian volleyed home with 12 minutes left on his 300th Chelsea appearance after Tammy Abraham’s opener had been cancelled out by Lille’s Victor Osimhen in the first half. (Photo:AFP)

Lille: A brilliant late strike by Willian earned an otherwise unimpressive Chelsea a 2-1 win at Lille in Champions League Group H on Wednesday.

Brazilian Willian volleyed home with 12 minutes left on his 300th Chelsea appearance after Tammy Abraham’s opener had been cancelled out by Lille’s Victor Osimhen in the first half.

Chelsea are third on three points behind second-placed Valencia who beat the Premier League side in the opening round of matches.

Ajax Amsterdam top the standings with a maximum six points after they claimed a 3-0 win at Valencia and Lille are bottom without a point.

“We knew we needed to win. I knew I would get a chance and I took it well. Never an easy place and Willian scored a worldie - no surprise there,” said Abraham, as coach Frank Lampard noted that Chelsea still had a long way to go.

“Having lost against Valencia, it made this a more important game. This is such a tough place,” Lampard said. “They were quick on the counter-attack and our performance was really good.

Lille captain Jose Fonte said his team must learn from their mistakes.

“We played a good game but in the end we have zero points. Maybe we didn’t learn anything from the Ajax game,” Fonte said.

Lampard’s side, who lost their opening game against Valencia, had Ngolo Kante in their team after the Frenchman passed a late fitness test and he stabilised Chelsea’s midfield.

The visitors enjoyed possession in the early stages as Lille looked to use their speed to hit them on the break.

Both teams, however, failed to properly threaten until Abraham beat the offside trap to collect Fikayo Tomori’s long cross and score his first Champions League goal from close range on his 22nd birthday.

But Lille stuck to their plan and Luis Araujo came close at the end of a sharp counter-attack.

It led to two consecutive corners and from the second, Osimhen powered a header home to level in the 33rd minute.

Chelsea struggled on set-pieces and Benjamin Andre’s glancing header was well saved by keeper Kepa Arrizabalaga in the 52nd minute.

Lille seemed to run out of energy in the closing stages and Chelsea benefited from poor defending to wrap up the win in the 78th.

From the left flank, Callum Hudson-Odoi sent a long cross to the far side and Willian, who had been left unmarked, unleashed a volley that bounced down into the ground and over Mike Maignan.

Lille pushed forward in the closing stages but Chelsea held on to extend the hosts’ run to 10 consecutive European home game without a win.