It’s not about winning, it’s how you win: Albert Roca 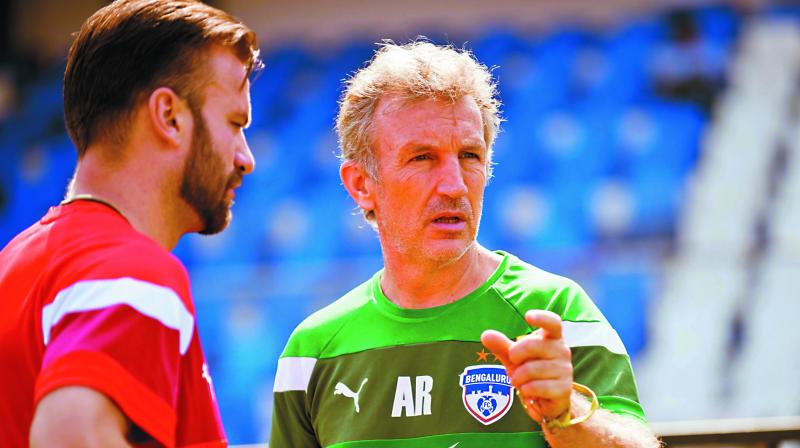 Bengaluru: Albert Roca is very expressive man. His hands and body move in sync as he speaks, giving the impression that he is trying to control the air and project his words. Maybe in an effort to make his words seem physical, so that the listener can feel it. Understand it.

He is a man who likes control.

But within that control is an openness. A willingness to include others, an effort made to explain and listen.

The manager’s room reflects the same. The training schedules are meticulously marked and planned weeks, sometimes months, in advance. So that everyone at the club knows what to expect and how to plan. A wall board with all the players’ names and faces on a pitch to decide his match day squads and plans.

A far cry from the controlling and demanding demeanour of his predecessor. Ashley Westwood was cut from a different cloth. The tactics and day plans were filled out in small pieces of paper, so was the line-ups. His approach was to get the players to do what they have to do to win.

For Roca, it’s not just winning, it’s also about how.

“I just wanted to keep the results and maybe have another kind of style in playing football. It’s not about just winning for me, it’s also about the way,” explains the Spaniard.

Coming from a Spanish culture, it’s easy to understand the 54-year-old’s penchant towards a certain philosophy. But when you add his experience in Turkey and managing the Saudi Arabian and El Salvador national sides, there is more to the reasoning than just preference.

“I am coming from Spain and from a team, Barcelona, and you know how they treat the ball. I feel it’s the style that Indian football has to follow,” he remarks having taken into account the physicality of the Indian people.

‘Tactics, not physicality the key’
“In Spain, we are not the strongest or biggest people in Europe. The Germans, the Dutch, the English, French are faster and stronger. Spain is on top of world football because we understood that success was not related to physicality but tactics. That’s what I have tried to bring here from the first moment.

“I can’t say we are playing like that because we are very far from playing tiki-taka. Still, if I am the one who starts it then someone else can continue that path.”

It’s not been an easy season for Roca in the Garden City. Following their historic run into the AFC Cup final at the beginning, which included an outstanding demonstration of how the team can play in the new philosophy against Johor Darul Ta’zim in the semifinals, things went off the rails during the league campaign. But BFC did finish with the Federation Cup title. A successful season after all, albeit a transitional one.

One where there was some deep rooted tactical and mental issues to tackle for the former Barcelona assistant manager.

“I think we have to go back to the roots. When I see a coach putting four cones and ask (the player) to dribble past and shoot, there are no decisions. Football is all about decisions. Just to hit goal and try to score, that is not related to the reality,” stresses Roca.

This where his worldly nature comes to the fore as he explains the finer details. A far cry from the coaches in India, who shy away from discussing tactical nuances.

“Methodology helps change things. Our methodology is tactical, 80% of the time we are on the training pitch, the idea is to improve our tactics and techniques. Physical part as well,” Roca ploughs on.

“If Ranjan (Salaam) is centre back, then I want Ranjan to know exactly what he has to do. What kind passes to play and what are his options while passing. The more he plays that position with the skill that he has at the moment, the more he improves in a tactical position. For each player, it’s the same.”

Holistic control of the match that spans the whole field and the whole 90 minutes. That’s the end game.

“Control (of the match) is important. Everyone has to understand his position and the importance it has. It’s between the defence and the midfield. In football, there are four moments. One is attack organisation. Second one is defensive organisation. Then transitions, both defensive and offensive. These are the four periods in any game. You have to know how to play during counter attacks and during transitions defensively when the other team wins the ball back and so on.

This is the very reason why Roca waves away all the talk of how shifting to a back three as the major reason for the turnaround late in the season and the eventual success.

Roca, who had previously stressed about the need for him to adjust to the conditions here, continues to reiterate the same after one full season.

“It’s not about what you want but about what you can make. It’s easy for people to think that a former Barcelona assistant coach would come in and in five months he will change the way the team plays. Come on!! That’s not how football works,” comes the statement with a dismissive wave of the hand.

In that match against Johor on a balmy evening last October they showed glimpses of what can be. What needs to be done is how they can extrapolate it over the course of the season.

“Well, that’s what I want from the boys (high pressing and swift pass and move style). But then you realise you don’t have the people. It cost me a lot to change the mentality of some players. It’s not easy. For me, it was also about adapting to the circumstances. But I?won’t change my philosophy,” he signs off adamantly.