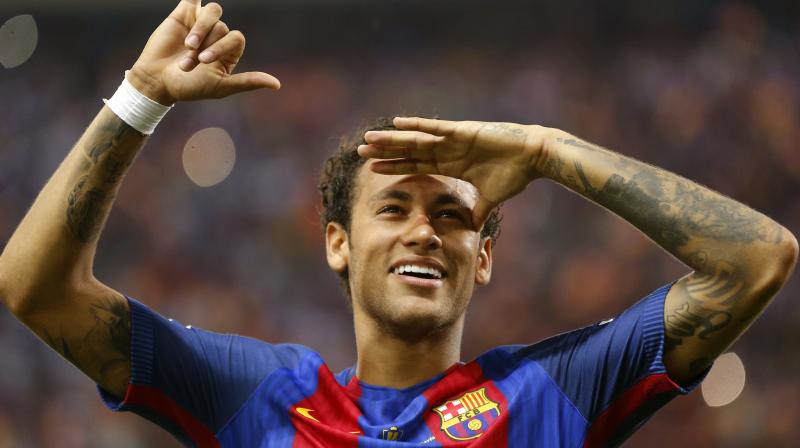 PSG confirmed that Neymar will be officially unveiled in a press conference at their Parc des Princes stadium on Friday at 11.30 am GMT (5 pm IST). (Photo: AP)

Paris: Neymar completed his world record transfer to Paris Saint-Germain on Thursday when he signed a five-year contract, the French club announced. The 25-year-old Brazilian earlier broke his contract with Barcelona by paying a 222 million-euro ($264 million,201 million) buyout clause.

"I am extremely happy to join Paris Saint-Germain," said Neymar in comments posted on the English language version of the club's website.

"Since I arrived in Europe, the club has always been one of the most competitive and most ambitious. And the biggest challenge, what most motivated me to join my new teammates is to help the club to conquer the titles that their fans want.

"From today, I will do everything I can to help my new teammates, to open up new horizons for my club and to bring happiness to its millions of supporters around the world."

PSG confirmed that Neymar will be officially unveiled in a press conference at their Parc des Princes stadium on Friday at 11.30 am GMT (5 pm IST). They have cancelled coach Unai Emery's press conference which had been scheduled for later in the day.

Neymar will then be presented to the club's supporters on Saturday afternoon ahead of their opening game of the new Ligue 1 season against newly promoted Amiens. "It is with immense joy and pride that we welcome Neymar Jr to Paris Saint-Germain," said PSG president Nasser Al-Khelaifi in the club's statement.

"Neymar Jr is today one of the very best players in world football. His winning mentality, strength of character and sense of leadership have made him into a great player. He will bring a very positive energy to this club."