This result came after their International Champions Cup match in Cardiff’s Millennium Stadium ended 2-2 in regulation time on Saturday. 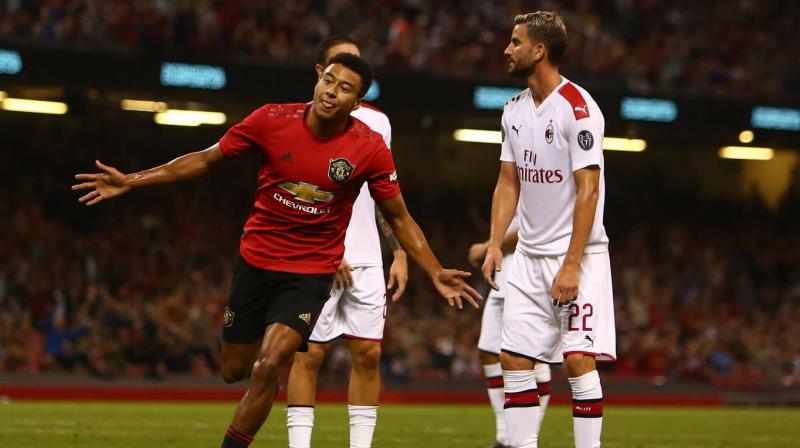 Substitute Jesse Lingard scored the equaliser, when set up by a through ball from Anthony Martial, with a low shot from an acute angle to send the game into a penalty shootout. (Photo: AFP)

United opened the scoring in their final pre-season match through Marcus Rashford, who took advantage of Milan’s high backline to make a run into space to collect Nemanja Matic’s long ball.

The 21-year-old cut back into the box and dribbled past two defenders before firing a right-footed shot past goalkeeper Gianluigi Donnarumma into the bottom corner, with the help of a deflection off Milan captain Alessio Romagnoli’s heel.

However, their lead lasted only 12 minutes when Milan’s high press allowed the Italian side to win the ball back in the final third when United tried to play out from the back.

Matic lost possession a few yards outside his own box and the ball eventually fell to midfielder Suso, who took a shot from range to beat a diving David de Gea and make it 1-1.

The former Liverpool player then created the second goal when he whipped in a cross from a short corner, with Samu Castillejo’s header deflected into the net off United centre back Victor Lindelof.

Substitute Jesse Lingard scored the equaliser, when set up by a through ball from Anthony Martial, with a low shot from an acute angle to send the game into a penalty shootout.

It was all square at 4-4 in the shootout when De Gea saved Daniel Maldini’s effort, after which new recruit Daniel James scored the decisive spot kick to give United the win.

Ole Gunnar Solskjaer’s side begin their new Premier League campaign next Sunday when they host Chelsea.