The Indian defensiuve midfielder is all set to take part in the Under-17 World Cup which will begin from Friday. 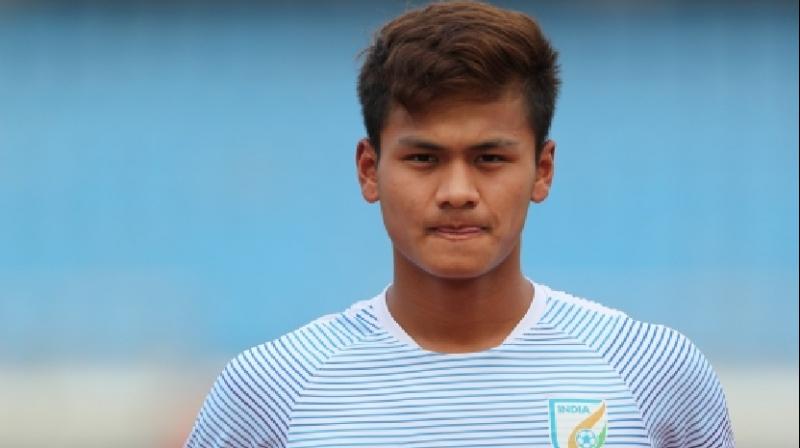 Jeakson Singh indomitable will has brought him back into the Indian team for the U-17 World Cup after been rejected by national selectors in 2015. (Photo:AIFF)

New Delhi : India U-17 World Cup team is all set to make history by taking part in FIFA U-17 World Cup 2017 which will be commencing from October 6. This will be the first team to participate in such  a big event  across all age group.

The majority members from the 21 member squad belong to north east region. Jeakson Singh India’s defensive midfielder from Haokha Mamang village in Manipur's Thoubal district had to struggle a lot to be a part of history.

The meagre family income pulled through by his vegetable-seller mot1her has Jeakson Singh worried quite often but the midfielder shoves it away by focussing on the pride he feels in representing India at the FIFA under-17 World Cup.

His father Konthoujam Deben Singh suffered a stroke in 2015 and had to leave his job with the Manipur police. His family is now run dependent on the meagre income brought by his mother from selling vegetables at the Khwairamband Bazar in Imphal, 25km from her home.

"When I left home for Chandigarh in 2010, it was alright. But my father had a stroke (in 2015) and cannot properly look after the family now. My mother sells vegetables at Khwairamband Bazar (in Imphal) with my maternal grandmother and that is the family income as my father had to leave the job when his illness started," Jeakson said.

"I have been dreaming of playing for India since childhood and my life has changed. I am looking forward to wearing the India jersey in this World Cup. But I am worried about the condition of my family," the 16-year-old told PTI in an interview.

Jeakson's elder brother Jonichand Singh is also a contributor to the income as he is currently playing for Peerless club in Kolkata Premier League but that has not made much of a difference to their family back home.

Not just the financial issues, Jeakson had also had to face the disappointment of being rejected by the national selectors in 2015 when he was with an academy in Chandigarh.

But his indomitable will has brought him back into the Indian team for the U-17 World Cup beginning on October 6.

Jeakson then joined Minerva, another Chandigarh-based academy. He then went on to lead Minerva to the national U-15 and U-16 titles in 2016 and 2017. That led to Minerva being invited to play friendly matches against the India U-17 team in Goa in March.

"The chance came when Minerva was invited to play friendly matches in Goa against the India U-17 side. We beat India U-17 team 1-0 and after that I and three others from

Minerva were selected for the India camp at the AIFF Academy in Goa," said the defensive midfielder.

Luis Norton de Matos, who recently took over as head coach, lost no time in picking four players, including Jeakson, into the India team. At six feet and two inches, Jeakson is the tallest outfield player in the India U-17 World Cup team. He said his side will show the world that they can also compete against the best in the world.

"People think the level of Indian football is very low, that is a wrong notion. We are not that low. We want to show the world that we can play at the highest level," he said. "We have full confidence in our capability. We had gone to Europe for training and competition. They we played in a four-nation tournament. We have prepared very well for the

tournament," he said. Jeakson and the Indian team captain Amarjit Singh are first cousins and they started playing football together under the tutelage of Jeakson's father. They both went to Chandigarh in 2010 when they were in class V. Amarjit was selected to train at the AIFF Academy in 2015 while Jeakson had to wait for two more years.