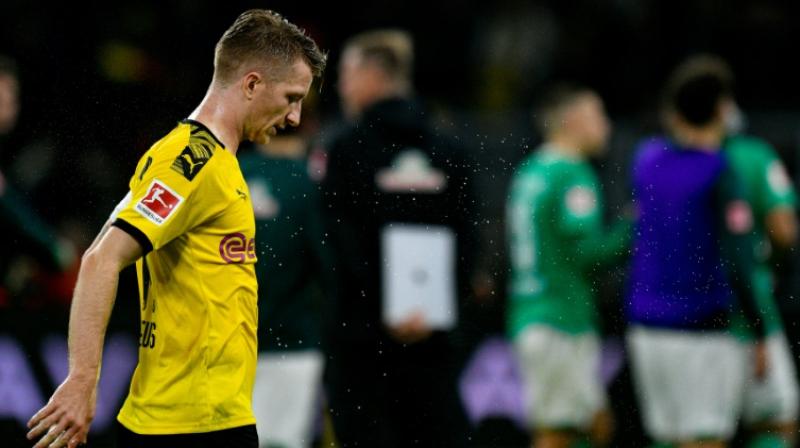 Marco Reus shows his disappointment after Dortmund drew another game in a row. (Photo:AFP)

Borussia Dortmund have been urged to rediscover their killer instinct, and silence lingering doubts about a lack of ruthlessness, in order to stay in the Bundesliga title race this weekend.

Back-to-back draws against mid-table teams Eintracht Frankfurt and Werder Bremen -- having been ahead on both occasions -- left Dortmund eighth in the table.

They are just three points behind leaders Bayern Munich in a tightly-packed top half, with five teams just a point behind the defending champions.

Dortmund need a win at third-placed Freiburg on Saturday to stay in touch.

Having won 2-0 at Slavia Prague on Wednesday in the Champions League, a second victory in four days would put Dortmund's Bundesliga campaign back on track.

Goalkeeper Roman Burki has said the team must 'man up' and get ruthless in Freiburg, a notoriously hard place to pick up three points.

"We aren't playing like men. The killer instinct up front is missing," he raved after the draw with Bremen on Sunday.

With Mats Hummels restored to the team after a back injury, Dortmund's defence should be tighter at Freiburg.

Reus reacted angrily when a Sky reporter recently asked if the team had a mentality problem and midfielder Axel Witsel batted off a similar question after the Bremen draw.

Chief executive Hans-Joachim Watzke agreed with Burki that Dortmund must get ruthless, even at the expense of their attack-minded football, to grind out wins.

"I believe that we must stop being in love with our own football - instead, we should be in love with winning," Watzke told Munich-based daily Sueddeutsche Zeitung.

In order to usurp the Bavarians, Dortmund must mimic the relentless ruthlessness of Juventus, who have been Italian champions 35 times, says Watzke.

"We should learn to defend our goal again with teeth and claws," he said.

"They (Juventus) are extremely focused on the result.

"We need a bit more of that, so we don't just define ourselves through beautiful football, but also through tough defensive individual work."

One to watch: Robert Lewandowski 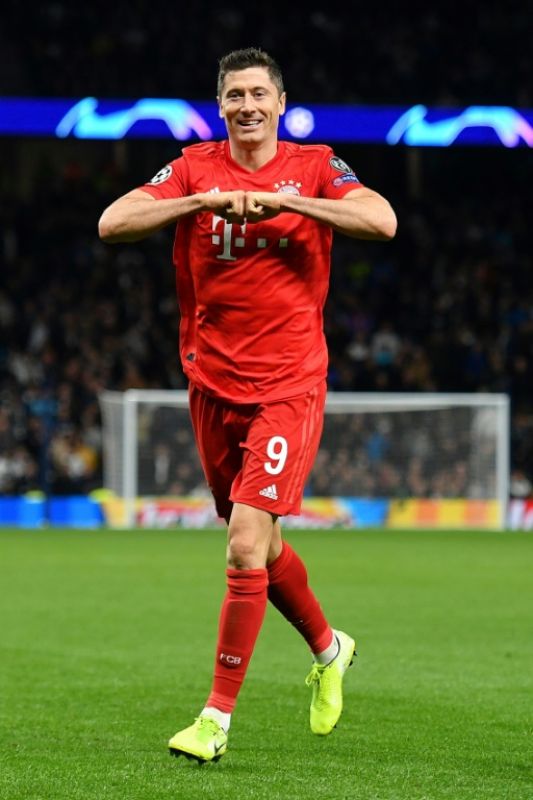 After scoring twice on Wednesday as Serge Gnabry hit four goals in Bayern's 7-2 drubbing of Spurs, Robert Lewandowski has 14 goals in 10 games in all competitions.

The Pole, 31, is in the form of his career, especially in the Bundesliga where he has 10 goals from the first six games - double that of closest rivals Leipzig's Timo Werner and Dortmund striker Paco Alcacer.

If he scores against Hoffenheim at the Allianz Arena on Saturday, Lewandowski will have netted in each of the first seven league games this season.

That would leave him just one short of the record, when Pierre-Emerick Aubameyang scored in each of the first eight games of 2015-16 for Dortmund.

212 - the number of goals Lewandowski has scored in 296 Bundesliga games for both Bayern and ex-club Dortmund.

17- the goals Bayern have scored in their last four games, six of which were claimed by Lewandowski.

6 - the assists (2) and goals (4) Amine Harit has in Schalke's last three games. Expect the Royal Blues' playmaker to cause Cologne a few problems on Saturday.

Fixtures (all times 1330 GMT unless stated)