Mario Balotelli thanks support after being racially abused at Verona

Balotelli performance was overshadowed by his fury at Verona's notorious supporters, who have a long track record of and open racism. 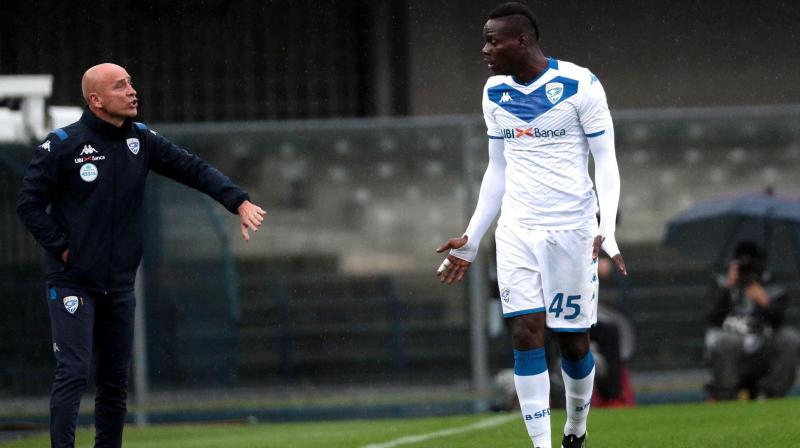 Mario Balotelli on Sunday thanked his fellow players and supporters for their support after he was racially abused by Hellas Verona fans, the latest in a series of ugly incidents that have blighted the early weeks of the Serie A season. (Photo:AP)

Rome: Mario Balotelli on Sunday thanked his fellow players and supporters for their support after he was racially abused by Hellas Verona fans, the latest in a series of ugly incidents that have blighted the early weeks of the Serie A season.

Brescia striker Balotelli scored in a 2-1 Serie A defeat at Verona that leaves his hometown side in the relegation zone, but his performance was overshadowed by his fury at Verona's notorious supporters, who have a long track record of far-right politics and open racism.

Despite denials of abuse from Verona, a video published on Twitter by a fan showed a number of supporters clearly directing monkey chants at Balotelli before the Italy international booted the ball at them in the stands.

The 29-year-old, who was born in Palermo to Ghanaian parents but was raised just outside Brescia, then had to be held back by players from both teams to stop him from leaving the field of play.

"Thanks to all the colleagues on and off the field for the solidarity expressed toward me and all of the messages received from you fans," Balotelli wrote in a message on Instagram alongside a video of the incident.

"A heartfelt thanks. You're real men, not like those who deny the evidence."

Verona coach Ivan Juric had earlier told Sky Sport that he heard "no racists chants, nothing at all" after a win that lifts his side to ninth, adding that "to say otherwise is a lie".

The club's president Maurizio Setti then said that his club's supporters were "light-hearted, not racist" and were a crowd with "real sport in its DNA".

"We are the first to condemn racism but it is wrong to generalise... Maybe two or three people among 20,000 fans might have said something," he said to Sky.

The match was suspended for a few minutes around the hour mark as Balotelli tried to force himself from the field before a message was read out on the stadium loudspeaker threatening that both teams would leave the field if there was a repeat of any abuse, a message that was whistled loudly by a large number of the home fans.

Balotelli's agent Mino Raiola told AFP he was backing his player, saying that he was "against all forms of racism." Italy coach Roberto Mancini, who managed Balotelli at Inter Milan and Manchester City, said that Italy "needs to work together to ensure that this sort of intolerance doesn't repeat itself".

A number of black players have been racially abused by supporters in Italy in the opening weeks of the season, with Milan midfielder Franck Kessie targeted by Verona fans in September and Inter Milan striker Romelu Lukaku abused at Cagliari, also serial offenders.

Elsewhere Balotelli's former club AC Milan continued their mediocre season with a 2-1 defeat to Lazio that left the seven-time European champions languishing in 11th, level on 13 points with Udinese.

Ciro Immobile's 100th Lazio goal and Joaquin Correa's strike seven minutes from the end gave Lazio their first win away at Milan in 30 years, which puts them fourth. Serie A top scorer Immobile's bullet header in the first half takes him to an astonishing 13 goals in 11 appearances.

Simone Inzaghi's side are level on 21 points with surprise package Cagliari and Atalanta after the Sardinian side saw off the 10-man Bergamo-based outfit 2-0 earlier.

Both sides are a point behind Roma, who stayed third following their 2-1 win over Napoli on Saturday which extends their unbeaten run in the league to six games despite a weeks-long injury crisis.

The Dutch international's first Juve goal since arriving from Ajax in the summer kept Inter Milan at bay by a single point despite Romelu Lukaku's brace sealing a late 2-1 win at Bologna and taking the Belgian's Serie A tally to nine in 11 games.