Their 4-1 win over a modestly equipped home side was not in itself an indication that City are capable of overturning Liverpool’s lead. 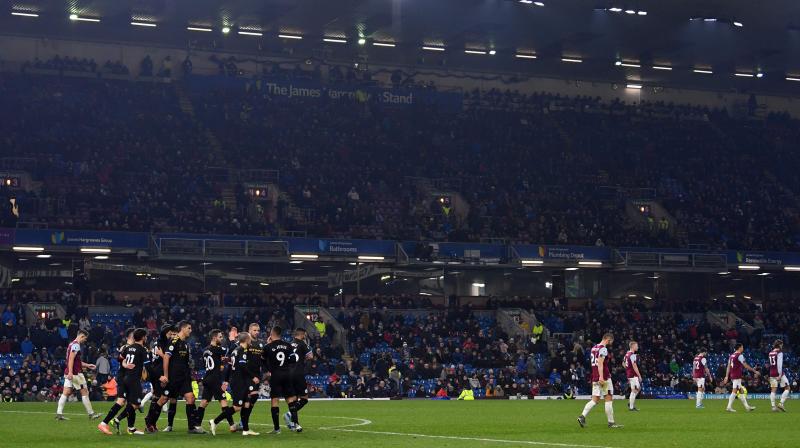 Manchester City needed to rediscover themselves quickly after a run of games in which they looked to have lost their way and Pep Guardiola’s champions re-emerged on a chilly Tuesday night at Burnley’s Turf Moor. (Photo:AFP)

BURNLEY: Manchester City needed to rediscover themselves quickly after a run of games in which they looked to have lost their way and Pep Guardiola’s champions re-emerged on a chilly Tuesday night at Burnley’s Turf Moor.

Their 4-1 win over a modestly equipped home side was not in itself an indication that City are capable of overturning Liverpool’s lead, which stands at eight points ahead of Wednesday’s Merseyside derby against Everton at Anfield.

But what was crucial was that City looked like a Guardiola team again.

In their recent performances, including Saturday’s 2-2 staleemate at Newcastle United and the midweek Champions League draw with Shakhtar Donetsk, City struggled to create the kind of dominance of possession for which they are known.

Even in their 2-1 home win over Chelsea the previous Saturday, City did not impress and registered only 46.74 per cent possession — the lowest of any side managed by Guardiola.

At Burnley that number was back up to 76 per cent and the Spaniard, not surprisingly, sees his side’s return to a dominant passing game as essential.

“I’m glad we pass more,” he said, noting that had been behind the team’s dip in form.

“The lack of more passes... we are built to have the ball and pass. You have to move the ball more as it’s the only way, to pass the ball, we did it really well,” he said.

With City zipping the ball around, with their old swagger back, some of the players who had been questioned in recent weeks showed their value.

Brazilian striker Gabriel Jesus, deputising for the injured Sergio Aguero, scored twice and looked sharp throughout, while Spanish midfielder Rodri showed his pedigree, with a thundering strike for the third goal capping a fine all-round display.

“We need (Jesus) to score these goals, they will help him and the team. We’ve lost an incredible striker in Sergio,” said Guardiola.

“Rodri was incredible for his physicality. The way he trains, he wants to learn, it’s nice to talk to him about tactics.

“In the right moment he helped us, he adjusted and he’s perfect for this league, and I think Manchester City bought an incredible player for the next years,” he said.

A happy Guardiola at last then, but one who would not speculate about catching Liverpool and winning a third straight league title.

“Our team is stable and that’s what we want. For the distance we have with Liverpool it would be crazy to think about the title, we have to think about the (weekend Manchester) derby, the other competitions, and take this rhythm.” he said.