Pep Guardiola's men have struggled to match the blistering standards they set in back-to-back title-winning seasons. 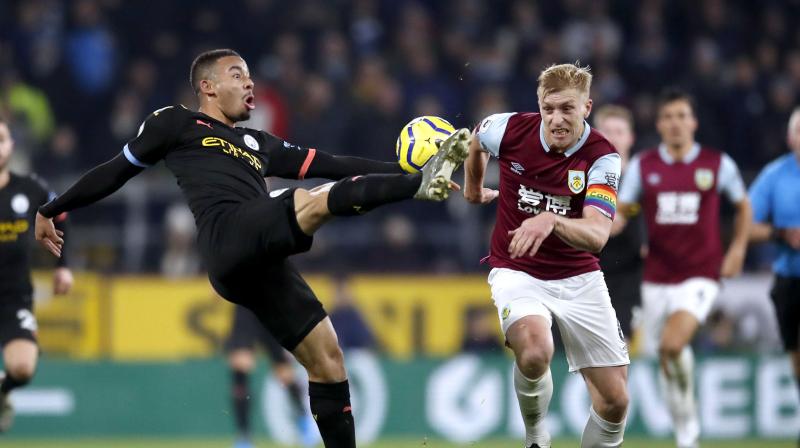 Gabriel Jesus scored twice as Manchester City showed no signs of giving up their Premier League title without a fight as a 4-1 victory at Burnley cut the gap on unbeaten leaders Liverpool to eight points. (Photo:AP)

Burnley: Gabriel Jesus scored twice as Manchester City showed no signs of giving up their Premier League title without a fight as a 4-1 victory at Burnley cut the gap on unbeaten leaders Liverpool to eight points.

Pep Guardiola's men have struggled to match the blistering standards they set in back-to-back title-winning seasons, but looked more like their old selves in what could have been a tricky trip to Turf Moor.

Jesus made the most of his chance to shine in the absence of the injured Sergio Aguero with two brilliant finishes either side of half-time to end an eight-game goal drought before long-range strikes from Rodrigo and Riyad Mahrez moved City above Leicester into second place on goal difference.

"The strikers are there to score goals and we need him," said Guardiola of Jesus's importance with Aguero also expected to miss Saturday's Manchester derby.

"His effort, his commitment is always there but strikers like him and Sergio live for the goal and it's important." Robbie Brady pulled a late goal back for Burnley, who remain in 11th.

"City are a top-class side and they showed it tonight," said Burnley boss Sean Dyche.

"We kept it tight first half and made it awkward but they were excellent second half and we never got to grips with it."

The visitors were dominant from first minute to last and could have been far more convincing winners but for some wayward finishing and Nick Pope's resistance in the Burnley goal.

"We played a good game, we controlled them and we didn't concede much apart from the goal in the last minutes," added Guardiola.

"Our level was so good in most of the games. I don't have the feeling we played bad in certain games. In general, I'm more than satisfied with the level of the team."

Jesus did not look like a striker searching for confidence as he opened the scoring with a sumptuous curling effort that found the far corner from David Silva's pass.

Pope then stood up well to block with his feet from Raheem Sterling and Bernardo Silva to keep Burnley in the game until the break.

Jesus gave City a cushion five minutes into the second half with a thumping finish from Bernardo's inswinging cross.

Rodrigo continued a night of fantastic finishes when he capped a brilliant individual display by drilling high past Pope 22 minutes from time.

The Spanish midfielder insisted City would be ceaseless as they attempt to chase down Liverpool in the title race.

"Until the maths say something else, we are not going to give up on anything. We are going to fight until the end," Rodrigo told Amazon.

Mahrez came off the bench to score his 50th Premier League goal with a precise strike on his weaker right foot from outside the box.

Brady denied City a first clean sheet in eight games, but that was the only negative for the champions ahead of Manchester United's visit to the Etihad.

Crystal Palace moved up to fifth with a 1-0 win over Bournemouth despite playing for more than 70 minutes with 10 men at Selhurst Park.

Mamadou Sakho was sent off for a wild challenge on Adam Smith, but Palace frustrated the Cherries and then struck 14 minutes from time when Jeffrey Schlupp burst through the Bournemouth defence and fired low and hard past Aaron Ramsdale.