Ramos, the Real Madrid captain, is suspended from Tuesday's match because of an accumulation of yellow cards. 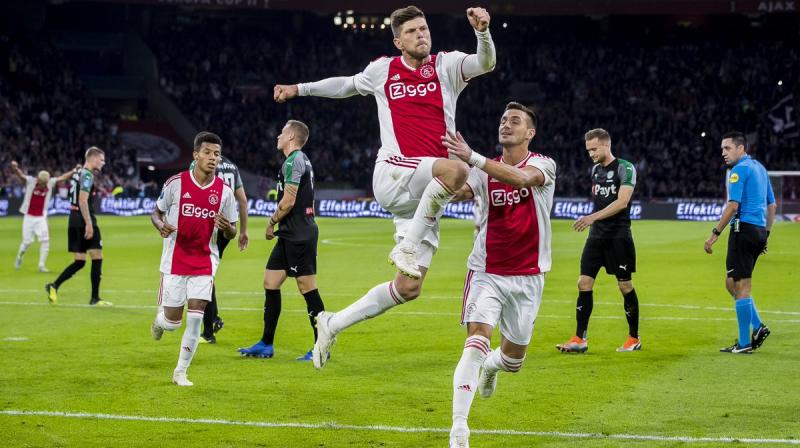 Ten Hag said he expects three-time defending champion Madrid to be extra motivated as the Champions League presents its only realistic chance of winning a title this season. (Photo: Twitter)

Madrid: Needing goals, Ajax hopes to take advantage of Sergio Ramos' absence when it faces Real Madrid in the second leg of the round of 16 in the Champions League.

Ramos, the Real Madrid captain, is suspended from Tuesday's match because of an accumulation of yellow cards.

"Ramos is Madrid's boss on the field and in the backline," Ajax coach Erik ten Hag said on Monday through a translator.

"His absence clearly is a loss tactically, but also mentally. It's a loss that will clearly be felt by Real Madrid. It obviously won't be as good as a team as if it had Ramos on the field."

Ramos will also miss the first leg of the quarterfinals if Madrid advances, as UEFA said he deliberately provoked the yellow card in the first leg so he could be available for future matches.

Ajax, playing in the round of 16 for the first time since 2006, needs to score at least two goals to reverse the 2-1 home loss in the first leg and make its first quarterfinal appearance since 2003.

"Our goal is always the same: To score goals," Ten Hag said. "This is Ajax. We don't care about which opponent we are playing against."

Ten Hag said he expects three-time defending champion Madrid to be extra motivated as the Champions League presents its only realistic chance of winning a title this season.

"They only have a chance to succeed in the Champions League, so they will be playing with a different attitude," Ten Hag said.

Madrid is coming off two consecutive losses to Barcelona at its Santiago Bernabeu Stadium, being eliminated in the Copa del Rey semifinals, and dropping in the Spanish league to 12 points from the lead with 12 games remaining.