City are another step closer towards clinching an unprecedented quadruple of trophies in Saturday's FA Cup semi-final against Brighton. 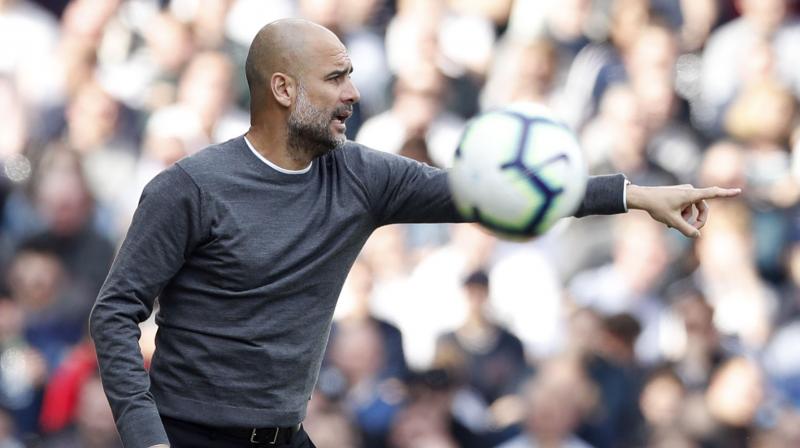 A potential 13 more games lie between Pep Guardiola's men and a clean sweep of FA Cup, Premier League and Champions League to add to the League Cup they lifted in February. (Photo: AP)

London: Manchester City are strong favourites to take another step towards an unprecedented quadruple of trophies in Saturday's FA Cup semi-final against Brighton at Wembley.

A potential 13 more games lie between Pep Guardiola's men and a clean sweep of FA Cup, Premier League and Champions League to add to the League Cup they lifted in February.

However, with another seven matches to come before the end of April, Guardiola faces a headache in a familiar problem position.

Oleksandr Zinchenko suffered a hamstring injury in Wednesday's routine 2-0 win over Cardiff that restored City to the top of the Premier League.

The Ukrainian has deputised ably at left-back, despite being a midfielder by trade prior to Guardiola's arrival, while USD 68 million World Cup winner Benjamin Mendy has been sidelined for much of the past two seasons due to knee injuries.

Guardiola's patience with Mendy has worn thin and was tested again this week when the defender was filmed in a nightclub at 3.30am last Saturday morning, hours before the English champions travelled to Fulham.

Mendy was not in the matchday squad, but was due in training the next day to continue his rehabilitation.

"They are old enough to know what they have to do, I'm not his father," said Guardiola when asked if he was angered by Mendy's late night. "I would prefer him to go home earlier but I don't control the players in that situation."

Mendy has played just 27 minutes in a League Cup tie at third-tier Burton Albion since November and Guardiola has previously spoken about reinforcing his left-back options for next season, suggesting the Frenchman's future at the club is far from assured.

Yet, with Fabian Delph also out injured, he could now be thrown back into the action for the most crucial stretch of City's season with Guardiola admitting "we don't have many options."

After facing a Brighton side hoping to reach their first FA Cup final for 36 years, City face Tottenham three times in 10 days in their Champions League quarter-final tie and the Premier League with trips to Crystal Palace, Manchester United and Burnley also to come before the end of the month.

If Mendy is to play a big part, he will need minutes at Wembley this weekend to get up to match sharpness with Guardiola unconvinced by right-back Danilo's ability to switch sides as he did for the final hour against Cardiff.

"He (Zinchenko) is important for us. He knows the way we want to play," added Guardiola. "Danilo fought a lot in that position, but it is not his natural one. We will find a solution."

Sergio Aguero is also an injury doubt for Saturday with the Argentine unlikely to be risked ahead of the trip to Tottenham on Tuesday.

Brighton are battling for their Premier League survival, but Seagulls boss Chris Hughton insists an upset is possible, even if he admitted it would be "foolish to go toe-to-toe" with Guardiola's men.

"If we were defeatist from the moment we're walking on the pitch then there's only one outcome," said Hughton. "To give us any chance at all, we've got to be positive about the way we want to approach the game."