A win for Spurs would have secured a top-four slot ahead of next week’s Champions League semi-final second leg against Ajax. 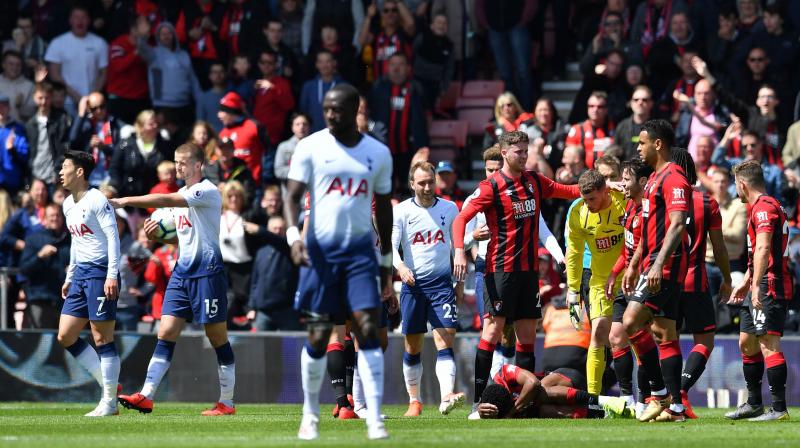 Son Heung-min was first to be sent off for pushing Jefferson Lerma just before halftime with Juan Foyth shown a straight red card for a studs-up tackle on Jack Simpson two minutes after coming on at the interval. (Photo: AFP)

The race to secure the final two Champions League qualification places from the Premier League looks likely to go to the final weekend after Tottenham Hotspur again slipped up, losing to a last-minute goal while having two men sent off at Bournemouth.

On an eventful final Saturday of the season, Cardiff City’s 3-2 defeat at home to Crystal Palace ensured they were relegated along with Huddersfield Town and Fulham, who lost 1-0 at Wolverhampton Wanderers, while West Ham United brushed aside Southampton 3-0.

A win for Spurs at the Vitality Stadium would have secured a top-four slot ahead of next week’s Champions League semi-final second leg against Ajax Amsterdam.

But, after losing at home to West Ham United last week and then going down to the Dutch side in midweek, Mauricio Pochettino’s side failed to fire again and went down 1-0 after Nathan Ake struck in injury time.

Son Heung-min was first to be sent off for pushing Jefferson Lerma just before halftime with Juan Foyth shown a straight red card for a studs-up tackle on Jack Simpson two minutes after coming on at the interval.

Spurs stay third on 70 points, four points clear of fifth-placed Arsenal, who have two games remaining. But Pochettino’s side know victory in their final game against Everton will see them qualify, with Chelsea and Manchester United also capable of securing a top-four slot.

“It is very painful to play with two players less than the opponent,” Pochettino said.

“We need to move on. We cannot change the decisions. We have ahead two finals against Ajax and Everton. It is in our hands. If it does not happen we will be proud because nobody expected Tottenham to be in the position they are today.

“We are fighting (five) teams, it is impossible for all six to get the top four, whatever happens I will feel proud and whatever happens in the (Champions League) semi-final I will be proud.”

Spurs also had to contest with a fine Premier League debut from 19-year-old goalkeeper Mark Travers, who was in inspired form for the hosts with a string of fine saves.

Cardiff never seriously looked like securing the win they needed to stand any chance of staying up, with Wilfried Zaha, Michy Batshuayi and Andros Townsend scoring the goals for Palace, who won for the fifth time in six away league games.

The result confirmed Cardiff’s relegation after one season for the second time in five years. It was also manager Neil Warnock’s third top-flight relegation after also going down with Notts County in 1992 and Sheffield United in 2007.

The Midlanders will be guaranteed to finish seventh in their first season after promotion if Leicester fail to beat Manchester City on Monday. Wolves would then need City to beat Watford in the FA Cup final to secure a place in Europe for the first time in 39 years.

The one bright spot for Fulham was Harvey Elliott, who became Premier League’s youngest ever player at the age of 16 years and 30 days when he came on after 88 minutes.

Marko Arnautovic scored twice for West Ham — his first goals for four months — as the home side completed a routine 3-0 win over Southampton. Ryan Fredericks rounded off the scoring with his first-ever Premier League strike.

Liverpool went into Saturday’s evening kickoff knowing they almost certainly needed to beat Newcastle United to stand any chance of pipping Manchester City to the title.